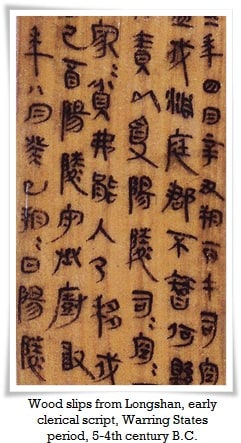 During the later years of the Warring States, together with increasing speed of communication, the need for a writing system that would be easier and faster than seal script (篆書, tensho), and, on the other hand, the appearance of more accessible writing tools (such as invention of paper around mid-3rd century B.C.) further encouraged the development of clerical script. By simplifying the complex structure of characters, merging dots into single lines, etc, reisho was brought to life.

One of the explanations given by historian for its peculiar name (隷, “rei” in Japanese means a “slave”, but also a “petty official”) is that it was initially used by lower class clerks, servants, etc., and the fact that it was secondary to seal script.

There is a theory that the creator of clerical script was Cheng Miao (程邈) from the 3rd century B.C., who was locked in prison for offending the despotic emperor Qin Shi Huang (秦始皇, the same one that initiated unification of great seal script under small seal script in 221 B.C.). It is said that the ten years that Cheng Miao modified the 3000 small seal script characters into reisho, also led to his release as a reward, and his immediate promotion to a high rank official of the imperial court. Recent archeological excavations however prove that reisho, like other core scripts, was not an invention of one person.

There are few types of clerical script, although two of them are the most significant. One is called korei (古隷, lit. “old slave (script)” and the other happun rei (八分隷lit. “eight parts slave (script)”).

Korei is the original form of clerical script, which differs quite significantly in its appearance from small seal script, being a blend of seal script elements with curious innovations, such as extended sweep strokes (磔, taku). In other words it was a prototype of later forms of official script.

Matured reisho in the form of happun rei (八分隷) takes its name from the shape of the Chinese character 八(hachi, in Japanese, meaning “eight”). Gradually, characters became more balanced and lines were written in a softer and more orderly fashion, eventually arriving at the symmetrically left-right divided character structure sloping like the lines of the kanji 八.

During the Eastern Han dynasty (東漢, 25 C.E. – 220 C.E.) the evolution of reisho reached its peak. There were many reasons for this. One of them was the introduction of paper and higher quality brushes, which enabled calligraphers to practice their craft with greater convenience. Another was the growing popularity of engraving texts on rocks or stalae (inscribed stone slabs), raised in memory of people or events. 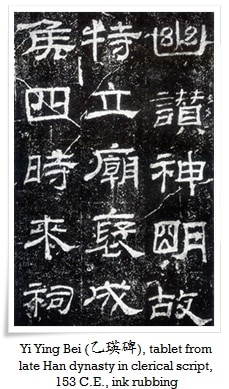 Official script aesthetically differs greatly from its predecessor – the seal script. Characters are not oblong, but rather squat, and of a much more abstract form (less pictographic). Lines are of various thicknesses and the deviation from the symmetry of small seal script is very visible, too. Curves change into strokes written at steeper angles, giving clerical script a more “modern” appearance.

Very characteristic for clerical script is a brush technique referred to as gyakunyuu heishutsu (逆入平出, thus “reverse entry, calm exit”) in Japanese. The brush reverses before it proceeds in the direction of each stroke, regardless of its length or direction. It introduces a certain rhythm to the writing, evident in the specific appearance of the characters. It is also in accordance with natural forces, where there is no action without reaction. One needs to crouch before a jump to make it effective and graceful.

Further, certain horizontal strokes consist of what is known as “silkworm head” and “goose tail” (蠶頭雁尾, santou gan-o). Such vertical lines involve five brush movements executed in a single stroke. It engages the whole body and mind of the calligrapher in a writing ritual.

Each character of clerical script usually consists of one line that has both elements: “silkworm head” and a “goose tail”. It is not random within the character such a stroke is being incorporated. There are also rare exceptions where more than one is allowed. This rule is known as 一字一波 (ichiji ippa), i.e. “one character, one wave”, from the wavy movement of the hand during the finishing of a stroke. Once this technique is mastered, it means that one has learned the basics of clerical script.

Writing reisho is extremely soothing for soul and body. Following specific writing rules not only introduces a certain rhythm, allowing us to be hypnotized by it, but also cocoons us in a feeling of the meditative continuity of writing. Calligraphy in the official script is dignified, yet raw, allowing the artist to clearly display his personality.

The popularity of clerical script, together with other styles, was growing through Han dynasty (漢朝, 206 B.C. – 220 C.E.), especially since official imperial appointment examinations consisted mainly of testing calligraphy. Clerical script was the main style used during the exams. It is also important to understand that the Chinese paid great attention to handwriting. The Han dynasty was the birthplace of modern graphology. 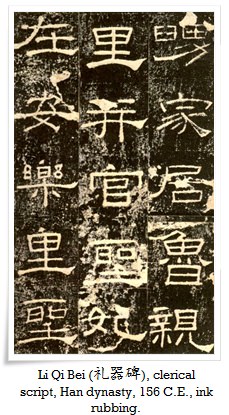 As a result, throughout the four hundred years of the Han dynasty, most texts were written in clerical style. With the fall of the Han dynasty, gradually clerical script began to lose its dominant position. Due to a continuously increasing need for more rapid information exchange, cursive script was slowly taking its place.

Nonetheless, because of its ancient allure and due to its high readability, reisho is widely used nowadays in crafting personal seals, advertising, designing company logos, newspaper headings or even restaurant names (along with traditional calligraphy, naturally).