Our mission is to help you learn about or improve your shodo / calligraphy, inspire you and have others discover your work and love it.

Dave Gosine: The seeds of Beyond-Calligraphy were planted in 1985 when my Japanese friend’s mother taught a few of lessons of shodo and sumi-e to our grade 6 class. I always remember thinking how strange it felt as I thought brushes were only for painting and pens were for writing. What did I know? I was only 12.

Fast forwarding ahead, I ended up moving and living in Japan. I did not know the language but was able recognize a few of the Kanji thanks to having lived close to Chinatown in my hometown. I decided to restart studying calligraphy after 25 years. Looking on the internet, I did not find much valuable information at the time. So in 2010 Beyond Calligraphy was born, as I wanted to create a place where everyone could share their experiences in Calligraphy and help each other grow together. 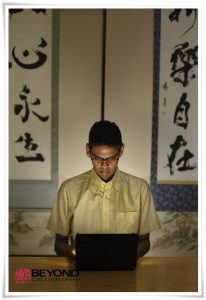 Sakiko Yanagisawa: Sakiko Yanagisawa began her study of Shodo at the age of 6. Entering Japan Women’s University in 1996 and majoring in Japanese Literature and Language, she studied with various shodo Masters of the Shiun Shodokai, including teachers such as master Okoshi Setsudo and Master Ishizawa Kochu among others.

After graduating from university in 2000, she decided to specialize in Shodo. She received the title of Shihan in 2008 from Shiun Shodokai. 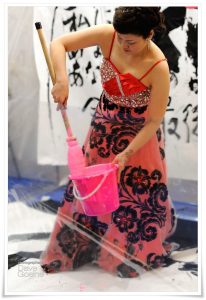 Rona Conti: My dream to study calligraphy in Japan took over 30 years. Living in Japan studying for long periods, when returning to the US, I felt a need for continued connections. Once I happened upon Beyond Calligraphy in 2012, I was delighted. I began editing, then writing articles and helping others to write theirs. Working with Dave and Sakiko, I continue to learn and hope others can have a similar experience. I know my calligraphy has improved from this association, and yours can too.. 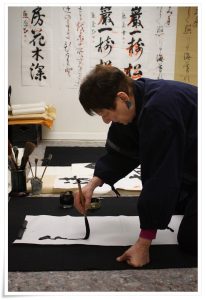