The inkstone (硯, suzuri, also sometimes referred to as “ink slab”) is one of the four treasures of a calligrapher’s studio (aside from brush paper and ink), although it is used in ink painting as well. Its history goes back to the New Stone Age era, 5000 to 6000 years ago, when various pigments were used to decorate pottery and other objects (such as those found in Yangshao, 仰韶). The first inkstone was nothing but a pigment mortar composed of a grinding surface and a grinding rod. 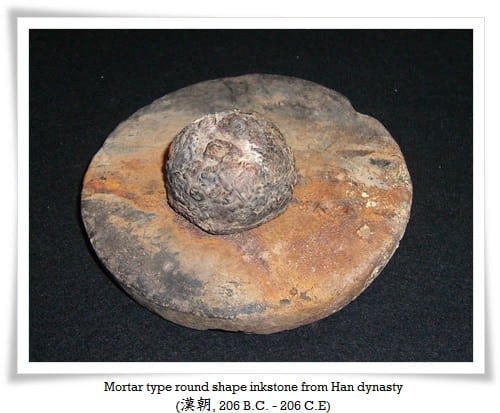 During the Han dynasty (漢朝, 206 B.C. – 220 C.E.) soot and animal glue based ink appeared, which eliminated the need for using the grinding mallet. This type of ink is still being used today in calligraphy. Also, around the mid-3rd century B.C. the first paper was invented. Together, they allowed for the increase in convenience and popularity of calligraphy.

The first inkstones were round and small. In later periods they were seed-pod shaped, with supporting legs to stabilize the dish during grinding. Starting with the Tang dynasty (唐朝, 618 – 907 C.E.) which is also known as the cultural “golden age” in China, production of writing materials developed rapidly, reaching its peak during the Song dynasty (宋朝, 960 – 1279), when many books about inkstones were written. Today, books and publications regarding the four treasures of the study (文房四宝, bunbou shihou) are very popular, especially in Japan. 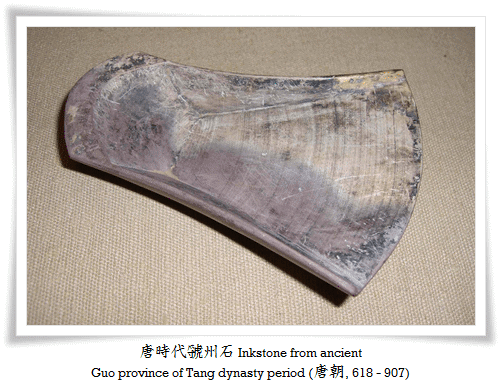 Also, despite the name “inkstone” they can be manufactured from materials other than stone, such as porcelain, metal, wood, etc. From the Ming dynasty (明朝, 1368 – 1644) materials used for producing inkstones were: crystal, jade, precious stones, gold, silver, or even bamboo. Naturally, the best quality inkstones are made of stones (with perhaps one exceptions of Chengni inkstone (澄泥硯), which is made of Yellow River silt.

In Japan, once a year on July 7th during the Festival of the Weaver there is a tradition, or perhaps it is more of a ritual, called suzuri ariai (硯洗い, lit. “washing the inkstone”). On that day kids at school rinse their inkstones, brushes and even desks with clean water wishing for scholastic blessings. It perfectly illustrates the importance and symbolism, as well as the sacred nature of calligraphy in the everyday life of the Orient. 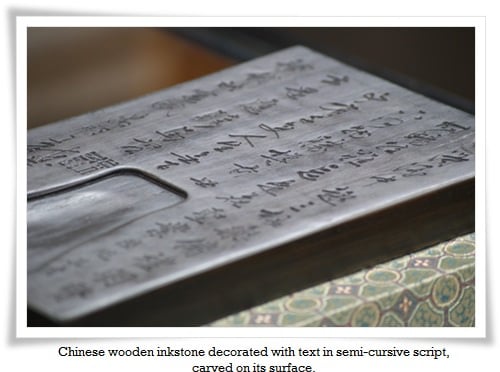 The inkstone is the second most important treasure of the study. It is also the only one that if taken care of properly will last for millennia. The inkstone is considered to be the soul and core of a scholar’s room.