Pottery markings found on Yangshao (仰韶) earthenware excavated near Banpo village (半坡) or other sites, prove that first “ink” existed in the form of a colour pigment at least 7000 years ago (mainly charcoal based). It was crushed on the primitive “inkstone” being nothing other than a mortar, composed of a grinding surface and a rod. This would explain the etymology of the kanji for ink (墨, sumi), which consists of two radicals: “black” (黒, kuro) and “earth” (土, tsuchi). 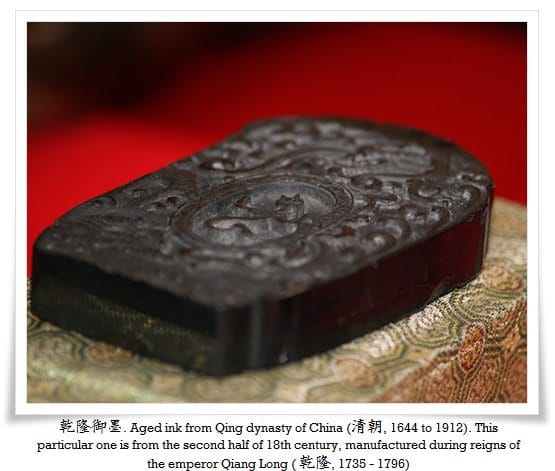 Single markings from Yangshao, and then texts in oracle bone script (甲骨文, koukotsubun) from the later Shang dynasty period (後商朝, 1300 – 1046 B.C.) are the first calligraphic works written with ink by means of a brush (as opposed to earlier forms oracle bone script, which were incised, starting at the beginning of Shang dynasty, around 1600 B.C.). Oracle bone texts were usually created on animal bones, bamboo slips but also earthenware. Unfortunately, due to the fact that ink produced at that stage was in liquid from (crushed pigment mixed with water) and not kneaded and hardened afterwards, as with its modern form, it is rather troublesome to confirm precisely what type of ink it was.

During the Han dynasty of China (漢朝, 206 B.C. – 220 C.E.) the first hardened form of ink was manufactured. It was flat and round or spherical shape, and relatively small in size. It is quite possible that this type of ink was already pine soot based, although it still did not contain any glue. 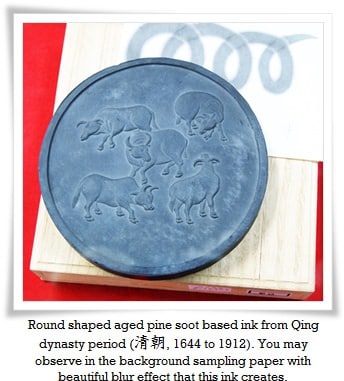 Together with discovering paper around the mid-3rd century B.C. writing became more and more popular. During that time, a sphere shaped ink tablet was replaced by a rectangular one, which was ground with water on the inkstone by hand, just the way calligraphers still do it today. This type of ink produces much better effects, as it is much finer and lump-free.

During the Tang dynasty (唐朝, 618 – 907 C.E.) when the first ink making artisans were recognized by calligraphers and painters, it became a respected profession. Appreciation was expressed by artists, who composed poems, music, or even wrote calligraphy about ink. 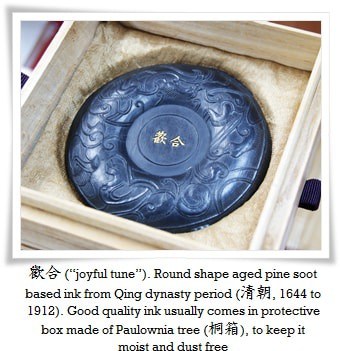 For a calligrapher, ink grinding is a form of meditation. The monotony of clockwise or counter-clockwise movements puts his mind and heart into a dream-like state. While preparing the ink we also consider what and how we will write. Concentrating on one thing only we travel deep into a realm of the shiny fragrant ink, and distance ourselves from the modern world.