Shodo is not about your Accomplishments with a Brush

First of all I must confess that I feel somewhat apprehensive writing this article, as I do not consider myself an artist by any means, just another student of the way.

My introduction into shodō(shodo, 書道) is perhaps somewhat different than many others. My journey began back in the late 1960s as a student of budō (武道). After studying various arts, I found myself becoming interested in kendō (剣道). One of my early kendō (Japanese swordsmanship) teachers was a man named Kenshi Nabeshima Sensei. If you know much about Japanese history you will be familiar with his family, his ancestors wrote the famous book “Hagakure.” Shortly after beginning Kendō Sensei informed me that it was expected of his senior students to become proficient in the art of shodō(shodo, 書道) and that I should start sooner than later. So my shodō journey began. Since then I have been privileged having many calligraphy teachers over the years, both Japanese and Chinese.

Some years later I traveled to California and became a student of kenjutsu (剣術), an older form of Japanese swordsmanship. To my surprise I discovered that on the kyōka (teaching curriculum) shodō(shodo, 書道) was a formal requirement. This meant that I would have to increase my studies of shodō(shodo, 書道) and intensify my practice. Much to my surprise my Sensei recommended that I find a Chinese calligraphy teacher, so that is what I did. My studies began with kaisho, gyōsho, sōsho, reisho, and finally tensho. My shodō(shodo, 書道) practice would go on to include tenkoku (seal carving), silk mounting, and finally kokuji (kanji carving). Kokuji is the carving of Chinese characters into wood for the creation of kanban (wooden signs) that I would go on to create for our dōjō.

There is another ancient saying that I would like to address. In Japan this is known as “bunbu-ryōdō” (文武両道), lit. “Both literary and military ways are the same”, or perhaps to be more concise, “The brush and the sword must be in accord.” 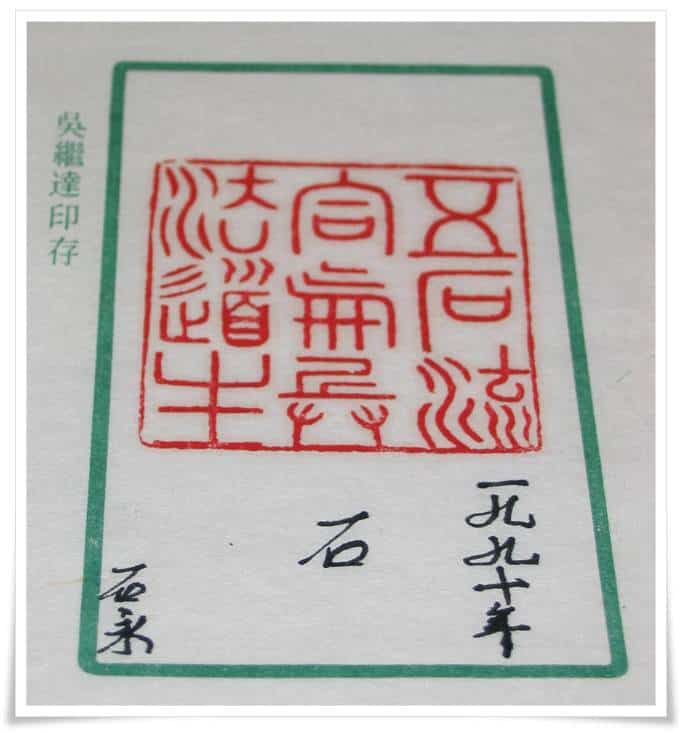 Samurai were expected to be cultured and literate and greatly admired the ancient saying “bunbu-ryōdō” (文武両道). By the time of the Edo period, Japan had a higher literacy comparable to that found in central Europe. Another reason this saying was popular is that the samurai also discovered that the study of calligraphy enhanced their martial arts as the same type of mental concentration and discipline are necessary for both. As a result shodō(shodo, 書道) came to be considered the 7th budō of Japan.

There is an old story told to me by one of my Japanese Sensei. It seems that long ago during a battle, one of the generals took out his brush and wrote a message of strategy on paper to be delivered by one of his junior officers to one of his commanding officers some distance off where a battle was taking place. After traveling for hours on horseback, the message was delivered to the commanding officer. He took out the message and to his surprise he could not read the orders as they were written in sōsho (cursive script). Without even a thought, the commanding officer committed seppuku (切腹), “stomach-cutting”. Hence another reason for the Japanese respect of “bun bu ryō dō.”

In the middle 1980s I opened a dōjō (place for the way), or as most would say, martial art training hall. I also decided to start a shodō(shodo, 書道) class for my budō students, which I taught formally for over 10 years. In addition, I developed a national shodō(shodo, 書道) correspondence course for students across the US. Also we began to observe the tradition of kakizome (書初), literally “first writing of the year”, which we still honor at our first class of each year.

I have been very fortunate to be gifted with many talented and dedicated students over my lifetime, both in budō and shodō(shodo, 書道). Many have gone on to become excellent budōka, calligraphers, and instructors, which is of course always the objective of any teacher. It matters not so much how great the teacher can become but how well he can teach, for this is the way all Japanese arts are passed down from generation to generation. Great teachers are merely custodians of the way.

It was many years ago that I asked my budō Sensei how budōka live out their lives when they grow old. He told me that most spend their time practicing shodō(shodo, 書道), reading spiritual literature, along with spending much time in contemplation and meditation. Well, now after many years of practicing budō, I’m left with a ravished and tarnished body. However, this is as it should be, and I spend my time exactly as my Sensei instructed. I have traveled a very rewarding path, and I’m very thankful to all who have assisted me along the way. 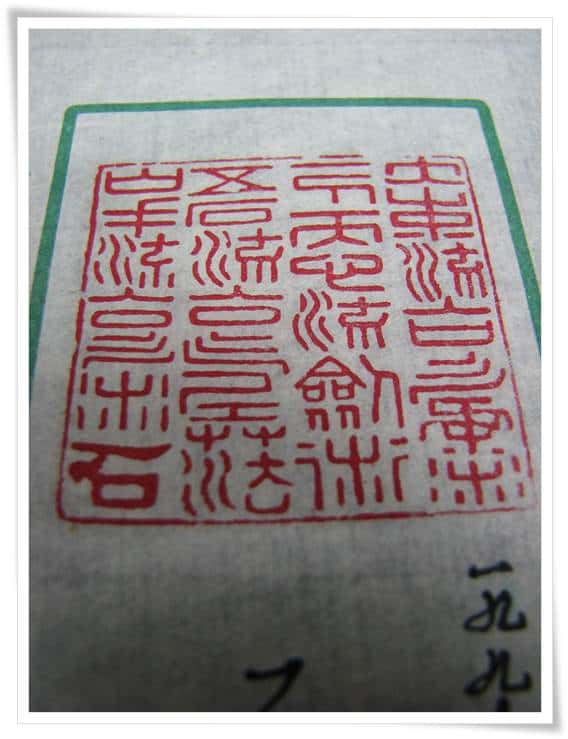 10. Instructor Seal, 1.5″ square, carved by Steve Weiss for his Sensei. Additional carvings on the front side of the seal. The seal reads from right to left: Daitō ryū Aikijutsu, Ittō Tenshin ryū kenjutsu, Goseki ryū Aiki Heihō, Yamate ryū Aikijutsu. ISHI, the man’s pen name, is the last kanji. These are the martial arts that the instructor taught in his lifetime. 1.5” x 1.5”.

In conclusion, I would be remiss if I did not address my personal philosophy regarding the practice and objective of true shodō(shodo, 書道). I have never felt that one’s practice should be totally centered on one’s self, or even about becoming a great calligrapher. When one can go into their room by themselves and practice daily without any intentions or expectations of producing a great piece, or have other additional desires, then they have penetrated into a true form of practice. Shodō(shodo, 書道) is not about your accomplishments with a brush, but about the way one uses one’s heart and mind. 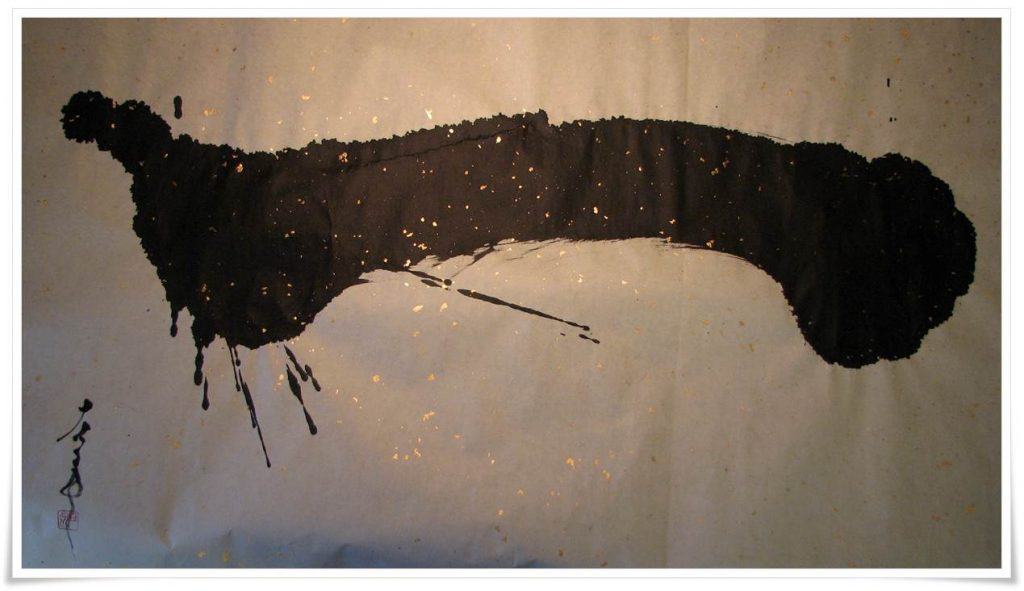 One’s mind should be in an egoless state of emptiness, yet fully concentrated and aware. When the mind is empty one’s spirit will come forth. It is about emptying one’s mind to allow one’s true self to reveal itself. Hence the famous saying,

“Calligraphy is a picture of the mind.”

Lastly, I would like to acknowledge some of my calligraphy instructors to whom I’m deeply indebted; Mr. Hsieh Chen Yao, Mrs. Lin Tsui, Mr. Wu, and Ishii Sensei.

I began my study of budō in the late 1960s and shodō in the late 1970s. I have owned and operated 3 martial art schools, taught at colleges around the Dallas area, and founded the Dallas Budōkai back around 1980; which is an organization dedicated to teaching and studying the classical ways of Japan.