Of course, in Australia, I was embraced by a totally different world, and for about two years, I did not paint at all. There were other things to discover in the land of wool – weaving. I had learned that craft in Bangkok, too, fascinated by Thai silk and cotton indigo ikat hand weaving, especially given the difficult circumstances the delicate and beautiful textiles were created. 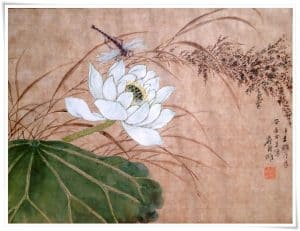 Our next posting was Vietnam. We were thrilled to be able to go back to Southeast Asia. Another adventure totally different from Bangkok of course. In 1990 Vietnam was just beginning to open up.

In the first week in Saigon I was lucky to be introduced to another great teacher – Mr. Thiem Quoc Hung. He practiced a totally different school I was used to and had liked. The Lingnan style which I studied in Bangkok is very spontaneous with bold strokes. Mr. Thiem painted and taught the traditional meticulous style using a lot more color.

Again, the approach was the same – students were invited to Mr. Thiem’s home where they studied under his guidance. I could see soon that this was not the style I would use but of course I valued immensely the additional tuition and different perspectives that I received from such a great teacher. 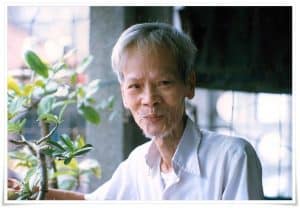 After some time Mr. Thiem could not continue his teaching because of his health (he was over 80).He, too, gave me a good-bye-present. He painted a white lotus and dragonfly and wrote something about having painted this picture for his student. Of course I could not read the Chinese calligraphy, but that is what I understood at the time.

I think I was extremely fortunate to have met him. I was told the Taiwan Fine Arts Museum has one of his paintings. His special strength was painting rocks.

The demand of learning Western languages was great in Saigon at that time but there were hardly any native speakers available who could teach. So, although I was not a language teacher but second best and in town, I started teaching German and English and stopped painting again for a while. Being in Saigon in the beginning of 1990 was simply exciting. I just absorbed this interesting place and, in turn, learned Vietnamese. 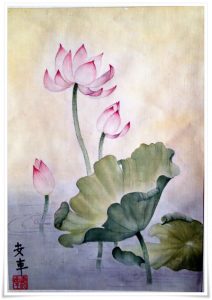 After about four years I was ready for something new. By that time I had discovered Vietnamese Silk Painting. Wet on wet watercolor techniques performed on a frame where stretched silk was prepared with tapioca glue resulting in wonderful, light and transparent paintings.

To find a traditional silk painting teacher was not difficult and I was happy to be introduced to Mr. Pham Van Khanh.

Unfortunately he was my teacher for only about four months. I wish I had had more time with him but life decides sometimes differently. Mr. Pham was allowed to immigrate to the United States. As a good bye present he painted a picture for me, signed it and asked me to sign it next to his name. In my ignorance I was hesitant but he explained to me that it signifies friendship. Unfortunately I have lost contact with him. I hope that he is still painting. 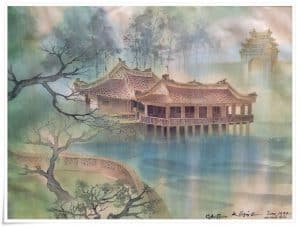 At the Saigon Fine Arts Museum I always stopped at a wonderful silk painting of cranes flying over a rice field. The cranes were partly embroidered. The artist was Mme. Nguyen Thi Tam . I learned that she had students, too, and soon I was one of the lucky ones.

After eight years in Vietnam we left for Canada where I did not have a teacher. But then, there were so many natural wonders to discover and interpret.

In 2000 we moved to Houston, TX. I found out that a Chinese teacher gave classes at Rice University – Mrs. Weihong Kronfield. I took several of her classes. This time it included Chinese calligraphy as I still had no confidence in signing with my given name. She herself practices Western art – funny how life works sometimes. 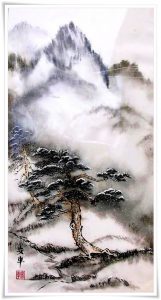 Following these classes I was caught again in the fiber artists’ net. I learned felting, spinning and had a wonderful weaving group. So much new to learn. Painting could wait for more settled times of my life.

>When learning felting, I attempted to apply my brush painting skills on felt work.

This wall hanging was accepted into a juried show of the Houston Area Fiber Arts group.

I was fortunate to be taught by excellent teachers, but I have the feeling that I did not fully utilize what I learned from them. My excuse, of course, is that my nomadic life with all its interruptions and excitements of being part of so many new cultures and arts balanced out my own pursuit of painting. Timing is everything. 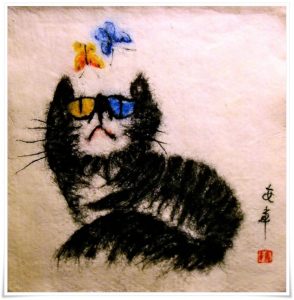 Figure 12: Wet felted wool wall hanging, 64 x 64 cm (2009), The motif is laid out with different colored wool rovings and then agitated by hand with soapy water into felt. The calligraphy and seal was needle felted.

That time is now. “Beyond-Calligraphy” strengthened my desire to paint again. It just struck me when I saw Ryuu’s beautiful calligraphy and I suddenly missed my brushes. As we were in the process of moving from Texas to Connecticut they had to wait for me for a while. I’m now united with them again. Writing this now I know that this time I will not stop.

Antje Goldflam, a talented Chinese brush painter and fiber artist, has translated some of the articles of the Beyond Calligraphy project into German and contributed a guest article. She spent nearly 30 years roaming many corners of this world, especially in South East Asia, following her husband and daughter, enjoying the wonders of different cultures and learning new art forms in her global wanderings. She is currently based in the United States and feels particularly blessed to have been a nomadic wanderer.