Logic Behind The Magic – Brush Principles, Part I.

Calligraphy has the nature of a free flowing wild river during the spring snow meltdown. It begins with feeling and leads to reflection and appreciation. It is a spiritual and profound way of communication between people, heart to heart.

However, to attain mastery in calligraphy, one needs to inhale and study the ancient rules and specific techniques that govern the writing. Only after those have been mastered to the extent that one does not think of them while writing will calligraphy be strong like an army of 10,000 men, agile like a skilled dancer, flexible as a bamboo tree on the wind, and as moving as the gifts of Mother Nature.

All three sets of rules are interconnected and rely on one another. Deficiency in any field will negatively affect one’s calligraphy art. In this part of the series, I will focus on the arm (positioning) principles. We can distinguish four of them:

All four methods have their application in calligraphy, depending upon the calligraphy style, the character size, the calligrapher’s personality, the positioning of the body during writing, the size of the paper, etc. I will break them down one by one.

Suspended arm technique, as the name suggests, is based upon the entire arm being lifted parallel to the paper surface in such a way that the elbow is not adjacent to the rib cage. The entire arm acts as a lever that moves the brush on the paper. This technique is used for writing larger characters, although not exclusively (more about that in Part II). Suspended arm technique offers the greatest freedom of movement out of the four methods, however, it does require a lot of practice. Shaking of the arm ceases when the calligrapher’s soul grows richer in experience. The older one gets, the more steady his or her arm becomes.

Pillow arm technique uses two hands. The left palm serves as a pillow for the wrist or forearm on which it rests. This technique is suitable for writing smaller scale calligraphy. It offers less freedom than suspended arm technique, but more than bucket arm method (see below paragraph). If it is the wrist of the right hand that rests on the left hand palm, then it will be curved upwards, as shown in Figure 2, whereas if it is the forearm that rests on the left hand’s palm, then the wrist of the right hand will have a more relaxed position, similar to the one applied in suspended arm technique. This method is quite often used in China, though it is not very popular in Japan. 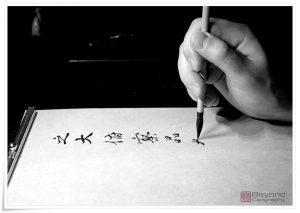 Bucket arm technique offers the least freedom of all four methods, and it is the most suitable for writing micro scale calligraphy (characters smaller than 2 centimetres in height). The wrist is laid directly onto the paper surface, curved steeply upwards, and the brush is moved by fingers only. Calligraphers can slide their wrist on the paper during writing, but its movement will never be as smooth as if it were suspended in the air.

Round arm technique is a variation of suspended arm technique. The wrist is thrust outwards parallel to the paper surface, as an extension of the forearm. Palm and fingers form a shape resembling the closed beak of a bird, with fingertips facing towards the calligrapher’s body. Although this technique allows for the arm to be fully suspended, movement of the wrist is virtually impossible, thus the brush tip movement is controlled by the entire arm. It is a quite rigid technique and very rarely used, though it doesn’t mean that one is unable to write even the most dynamic calligraphy works using this brush holding method.

Arm positioning is often confused with brush holding principles. The latter is based upon the finger grip on the brush, and it will be discussed in the second part of this series. 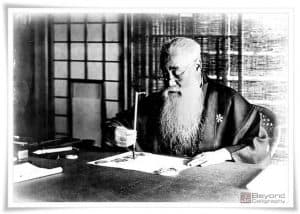 It is important to remember that one should not stick to one arm positioning method, although I must say that, personally, I am not a great admirer of the round arm brush holding method. It has its charm and can be a great match for large scale clerical (隷書, れいしょ, reisho) and seal (篆書, てんしょ, tensho) scripts since both scripts are based on a reverse brush entry technique (逆入, ぎゃくにゅう, gyakunyū, lit. “reverse {brush} entry”), which will be further discussed in Part II of the series. However, this requires that the calligrapher be very calm or even enter a state of deep meditation. Suspended arm technique is difficult to master, but it offers great freedom. Practicing it while writing smaller characters can truly benefit the skill of maneuvering the brush tip, the power core of the calligraphy spirit.