Is it Bad to be Too Decorative ?

The famous German architect Bruno Taut, who influenced modern architects such as Le Corbusier, fled from the Nazis and lived in Japan from 1933-36. During his stay in Japan, he wrote many comments about various elements of Japanese architecture, but he was especially fascinated by the Katsura Imperial Villa in Kyoto; a palace which was constructed in the 17th century. 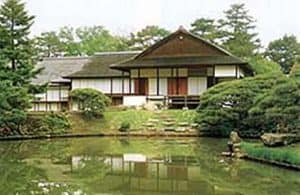 From the name “Villa” you might imagine a gorgeous royal palace, but, in fact, the villa is, from my point of view, extremely simple. It was built based on Zen’s minimalism concept, allowing people to enjoy Tea ceremony and moon-viewing without being distracted by the architecture. Encountering this villa, Bruno Taut cried and praised it as “a beauty that is completely non-decorative but functional in the spiritual sense”. This villa, after Taut’s evaluation, long thought to be as one representative of Japanese beauty. Zen’s simplicity or minimal aesthetic is without question a big aspect in Japanese culture. It is deeply rooted in Japan and has influenced many Japanese traditions.

But if you take a look at current Japanese culture, you’ll notice that there is a completely contradictory power emerging in the younger generation.

Have you ever heard of Japanese “Deco-Mail”?

extravagance is wide-spread among young Japanese. Contrary to the Zen minimal sprit, the super-decorative trend represented by “Kawaii” pop culture is also a prevalent representative of Japanese culture in Japan today.

But the question is, are these “deco” culture new to Japan?

The answer is obvious if you take a look at the anthology “Kokin-Wakashu” written in the year 1120 with Kana-Shodo. The poems are written on colorful papers, fully covered with silver and golden leaves. The embellishment on paper is of such an enormous amount, that it is even difficult to read the written Kana text. In Kana-Shodo, Ryoshi (料紙), or fancy designed papers are often used to add the atmosphere to the works. This trend to use “Ryoshi” is seen also in current Kana-Shodo. 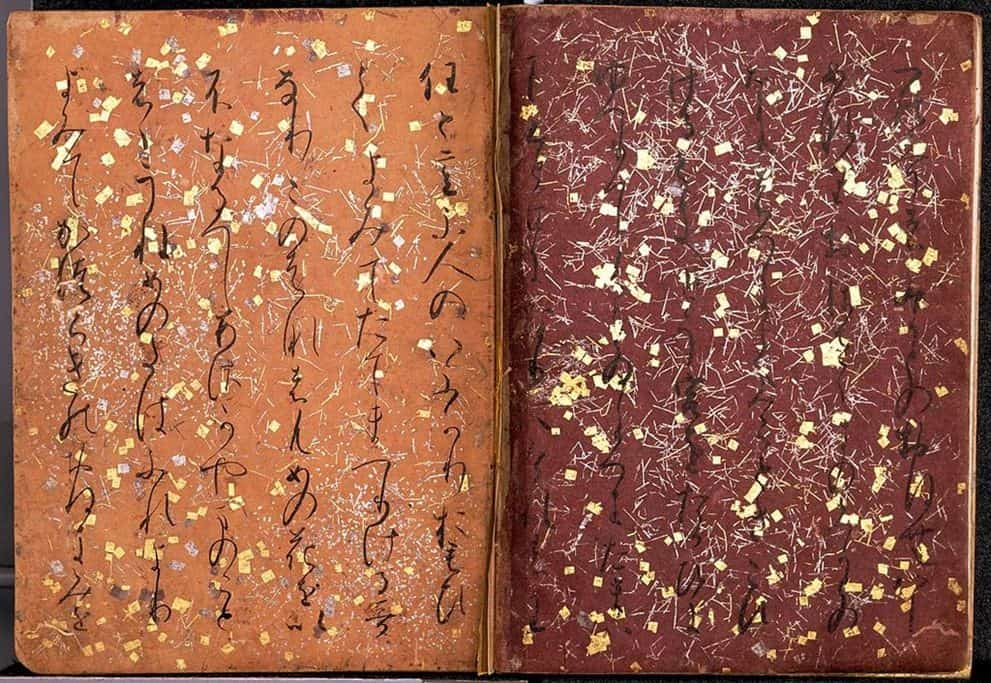 As mentioned in my previous articles, the noble class in the Middle-Ages gave much thought and effort to creating new variations of Kana characters in order to show their sophisticated intelligence. In the Middle-Ages, love letters written by noble women were the first step to show men their personalities because it was embarrassing for them to talk to men or to show their faces to men. If the woman’s writing was beautiful, she had a better chance to win the man’s heart, since the man felt that not only her writing, but also the woman herself must be beautiful. So the women trained themselves diligently to write in a rather soft and sexy form. By writing a love letter or waka, a Japanese traditional poem, the selection of the paper (Ryoshi) was also important. Because women rarely appeared in person before the men, they could not use their appearance. So the women paid close attention to express their taste when choosing a full decorated Ryoshi.

You can compare this to how much effort young Japanese girls today give to find or create their own animated text for their Deco-Mail in order to show their uniqueness and creativity. 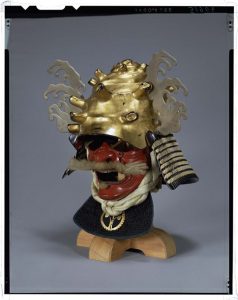 Men in the Middle-Ages were also not able to ignore the longing for decoration in objects.

Here are two more examples from the 17th century; “Deco-helmets” from Samurai warriors.

The first helmet is formed in a shape of a turban shell, Sazae, with waves streaming out from the both sides of the helmet, gleaming in gold.

The second helmet, spreading its wings like a peacock, is from the famous Samurai Hideyoshi Toyotomi. 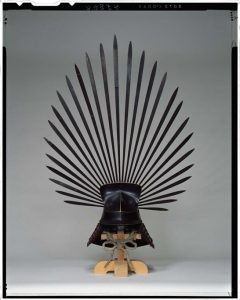 You might be surprised to see that even Samurai took their time to decorate their helmets, since samurai are thought to be the genuine practitioners of Zen. But Samurai also enjoyed showing off their existence on the battlefields with psychedelic helmets and armors.

There are many different theories to why samurai warriors preferred to put on such unique and spectacular armors. But I see it this way. Samurai had to always train themselves to fight against others and to confront the fear of death. Living in constant self-repression, their suppressed desires to enjoy their lives had bloomed on the battlefields.

Thus, just like Samurai who trained themselves to be simple and strong, but who also chose to decorate themselves on battlefields, the essence of Japanese culture is a mixture of simplicity and decoration.

Japanese handmade traditional paper, washi (和紙) was inscribed in 2014 on the Unesco List of the Intangible Cultural Heritage of Humanity. Producing white washi is really a time-consuming and demanding task. In my view, washi is full of zen. It’s a representative of simplicity. The beauty of thin white but strong paper is really worth worshiping.

On the other hand, decorative Ryoshi was unfortunately not included on the Unesco list. The reason could be its low level of public awareness. Ryoshi is not known, not only to the world but also forgotten currently in Japan. If you ask your Japanese friend what Ryoshi is, the chances are not so high that you get an answer.

But I feel that simplicity and decoration are both important elements of Japanese beauty. Japanese culture would be boring without both aspects. Thus, I use Ryoshi in my art to revive the legacy of 1000 years and introduce the beauty of Ryoshi to the world. 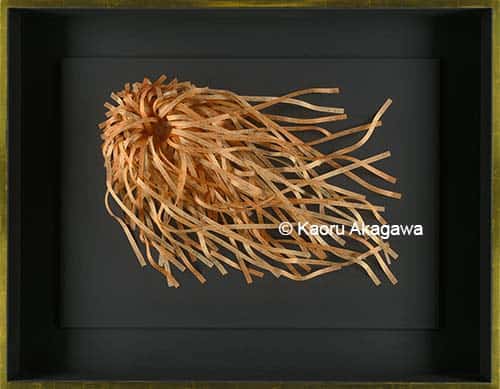 In my Kana Art, I use various Ryoshi in various decorative ways, imagining the connection between myself and the Japanese women in the Middle-Ages, realizing that the contradiction of simplicity, self-training and extravagance also lies deep inside my Japanese DNA.

Kaoru is an artist and master of Japanese traditional calligraphy, Kana Shodo. Born in Canada, grew up in the U.S., went to university in Japan and since 2007 in Berlin. With her globe-trotting background Kaoru challenges to revive ancient traditional Hiragana characters in modern times by merging Kana Shodo with modern art. (Photo: Stefan Eichberg)