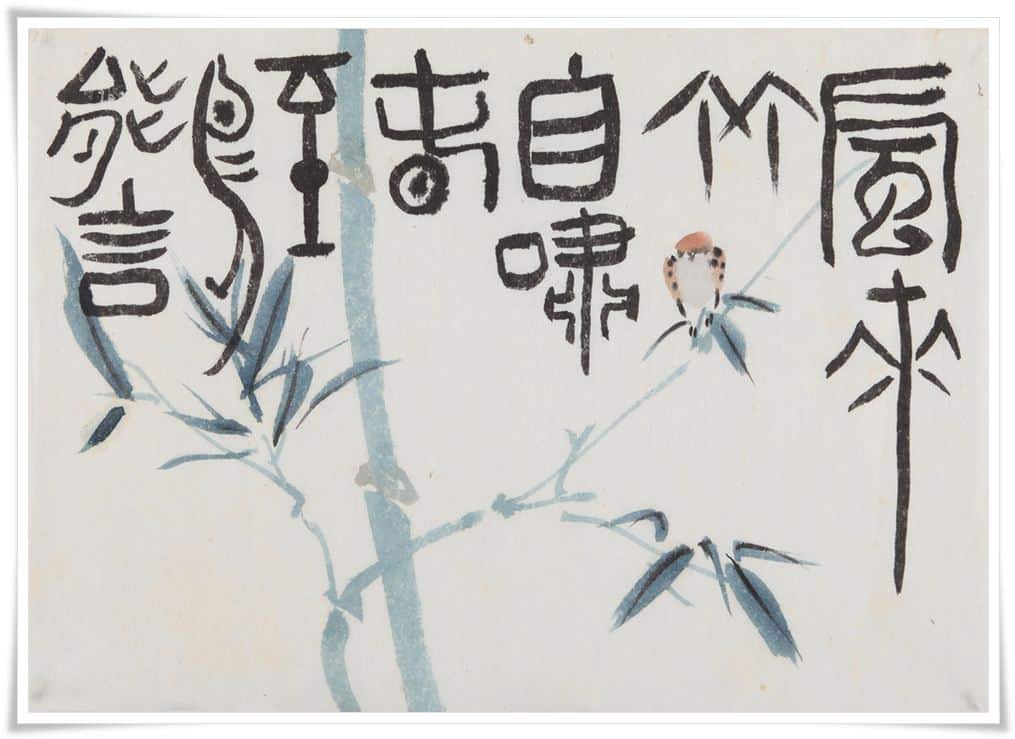 Chuyun Shu can be used to write any script, as long as it is written incisively it will reflect the inner spirit of the calligrapher, even pictograms can be included in his writing. This interest in the pictorial script is evident in the calligraphy written when he lived in Thailand (1951 to 1956). His calligraphy in regular script was infused with picture words, example in Figure. 4, Huang Yao wrote that “when the wind blows, the bamboo whistles; spring is here, the birds sing”, where the characters for “feng” (wind), “zhu” (bamboo) and “niao” (bird) are clearly pictograms. 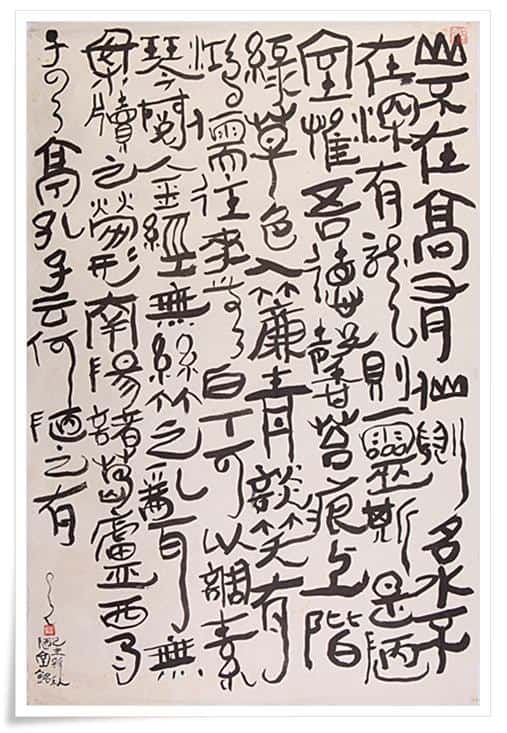 Huang Yao’s early Chuyun Shu had a naïve childlike look, but with practice his writing became more “mature” in the early 1950s as in Figure.4, and finally in the late 1970s, his calligraphy had an archaic feel and an awkward appearance. Figure. 5 was written in 1979. He attributed this style of writing to his early training in writing ancient scripts such as oracle bone, seal, Han and Wei scripts as well as the influence of children’s writing.

Painting in the background 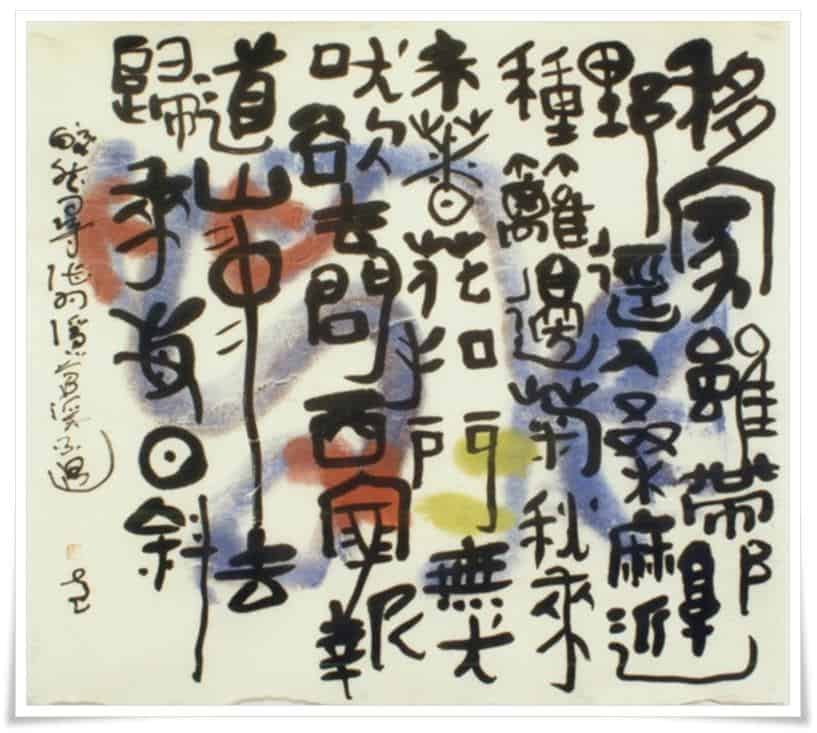 Use of painting to show meaning of the calligraphy, examples: 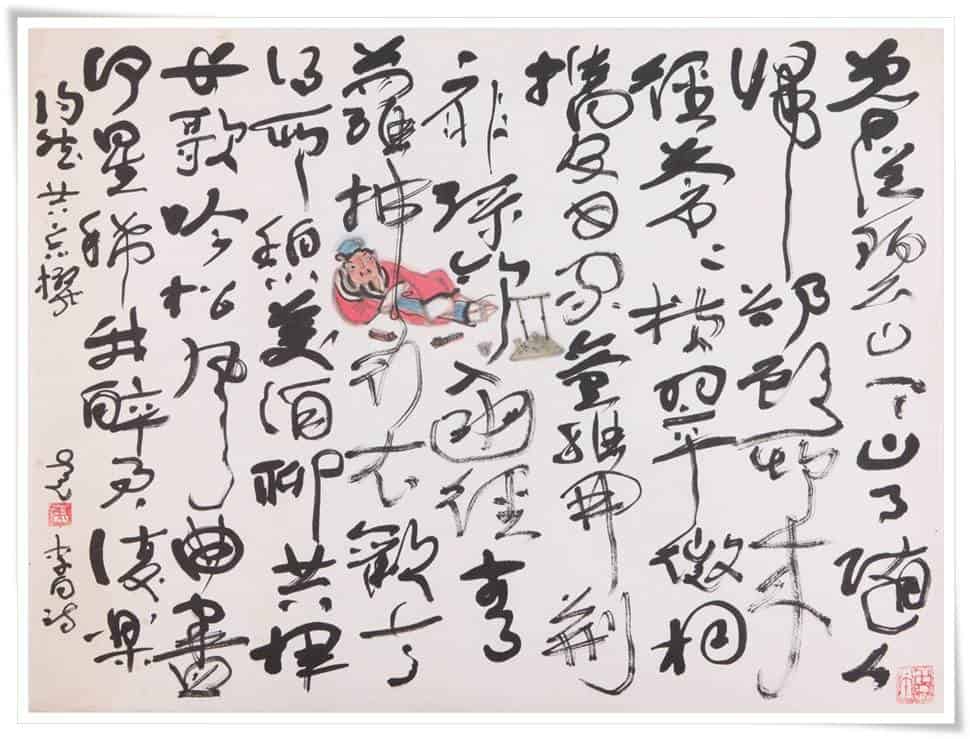 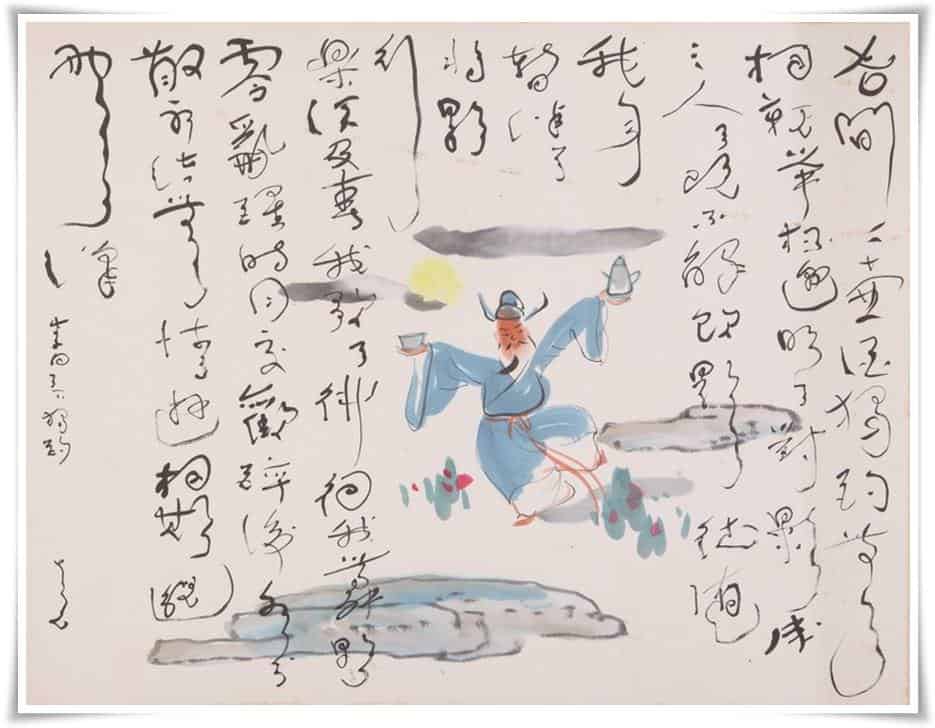 Huang Yao believed that Chuyun Shu should be a pleasurable way of writing. The calligrapher begins by relaxing both physically and mentally. With a peaceful state of mind, one’s innate dexterity is set free. Huang Yao would then write his favorite poems or verses in his usual order of strokes in the Chinese characters but upside down. Huang Yao considered Chuyun Shu as an unrestrained form of writing and best for spontaneity and speed, most suitable for caoshu where he was able to write characters fast without deliberation. This freedom in writing often allowed Huang Yao to express himself in a style that reflects the mood or emotion inspired by the meaning of the piece of the poem or verse. Figure. 10 is an example in expressing the rapid changes of the material world (The Diamond Sutra).

All compound things are like a dream,
a phantom,
a drop of dew,
a flash of lightning.
This is how to meditate on them or observe them.

Huang Yao had commented that there was really no secret to his ability to write Chuyun Shu in varying sizes, scripts and contents. People were curious and intrigued by this way of writing. He attracted large crowds whenever he gave demonstrations and he just wrote, wrote, and wrote happily. He felt that when he used Chuyun Shu the characters formed naturally, and not through conscious planning. He really thought it was just a lot of fun.

An interview regarding Huang Yao’s Chuyun Shu can be found at the link here.
For more examples of Huang Yao’s calligraphy, please refer to huangyao.org.

Part one of this article can be found here.

The Huang Yao Foundation was formally set up in 2001 after many years spent researching, collating and documenting the collection of works that it holds. Our goal is to raise the profile of Huang Yao’s work throughout the world so that he can take his rightful place in the Chinese art history and his artistic contributions can influence a new generation of artists.