Is the Emperor of Japan mocking the West? When the Imperial family appears at events wearing formal Western wear, does this represent cultural appropriation?

This question occurred to me while discussing the Kimono kerfuffle at the Boston Museum of Fine Arts. A second question would be why the change in dress? Did any country and its leaders force upon the Japanese the wearing of western clothing?

First, some simple observations. Of course the women of the imperial family also wear kimono to certain events as do others. But wearing a kimono in any part of Japan has become the exception to the norm. As a result, the kimono business and culture has been floundering greatly, and efforts are being made to try to save this art.

So how was western dress introduced to Japan? Japan’s history has been recounted in innumerable places and is not the purpose of this article. And I am not a historian, so I take responsibility for any unintended errors. Some history follows. In 1543, Portuguese traders arrived beginning the first contacts with the West, establishing trade routes to the port of Nagasaki. A few other places in Japan also had limited trade with other countries, but it was strictly controlled. Along with this trade came Portuguese missionaries who were successful in converting some Japanese to Christianity. 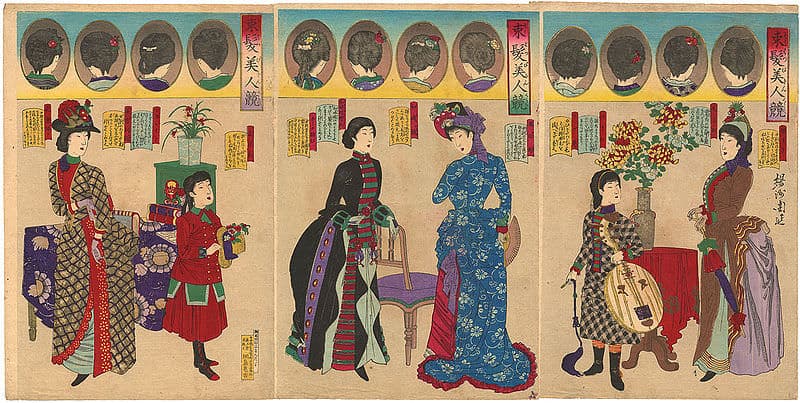 This relationship continued until 1639. A failed rebellion of enormous impact occurred and was blamed on the influence of Christians in Japan. The ruling Tokugawa shogunate set into place an isolationist policy, expelling all foreigners. With extremely rare exceptions, no foreigners were allowed to enter Japan, nor were Japanese allowed to leave (again with rare exceptions since the Japanese did send some people abroad to report back on current affairs). If any Japanese left without permission, the punishment was death. Thus, from approximately 1633 – 1853, for all intents and purposes, Japan remained closed to the West.

When The Black Ships 黒船, “kurofune”, of the United States entered Tokyo waters in 1853 , so called “gunboat diplomacy”, and insisted that Japan trade be open to the West, suddenly 250 years of isolation came to an end. The Shogun era ended, The Emperor became reinstalled with his previous powers.

Japan and its culture began reaching distant shores of Europe and the Americas and vice-versa. Some Japanese became intrigued with Western clothing and articles and wore them, embracing the new and presumably fashionable. There are many woodblock prints from the Edo period showing Japanese wearing Western garb.

The appearance of Japanese art and culture immediately rippled across the oceans. Painters in France were but one group influenced by Japanese art. Claude Monet’s 1876 painting “La Japonaise” (his wife Camille in a “Kimono”) is but one example.

It is this painting and an accompanying cultural experience which has caused a great deal of disruption at the Boston Museum of Fine Arts via protestors objecting to the opportunity to try on replicas of the robe in the painting worn by Camille. The protestors believe that Monet was mocking Japan and Japanese culture and that the wearing of the kimono by non Japanese or Caucasians was racist.

It should be noted that none of the protestors were Japanese. More interesting is that the protestors themselves had a protestor. Timothy Nagoaka, who teaches Japanese in the Boston public schools, was disappointed that the museum backtracked, ending the wearing of the kimono. He was hoping to take his students to see the work and accompanying robes. After all, a museum’s mission is to educate. His students would have learned much from the experience.

When a recent exhibition at the Setagaya Museum of Art titled “Looking East: Western Artists and the Allure of Japan from the Boston Museum of Fine Arts” was held, the kimono replicas were available to try on. Presumably, there were non Japanese visitors to the exhibition which included some of the Japanese works which inspired the Western artists’ works being shown. Many of these works fall into the art history category of “Japonism”, works created using Japanese arts for inspiration. There was no objection to this opportunity in Japan. The replicas were funded by NHK, the Japanese national broadcasting system which entertains and educates. The opportunity was embraced with enthusiasm. Of note also is that concurrent with the Monet painting at the BMFA are two masterful large exhibitions, “Hokusai” and “In the Wake, Japanese Photographers Respond to 3/11. 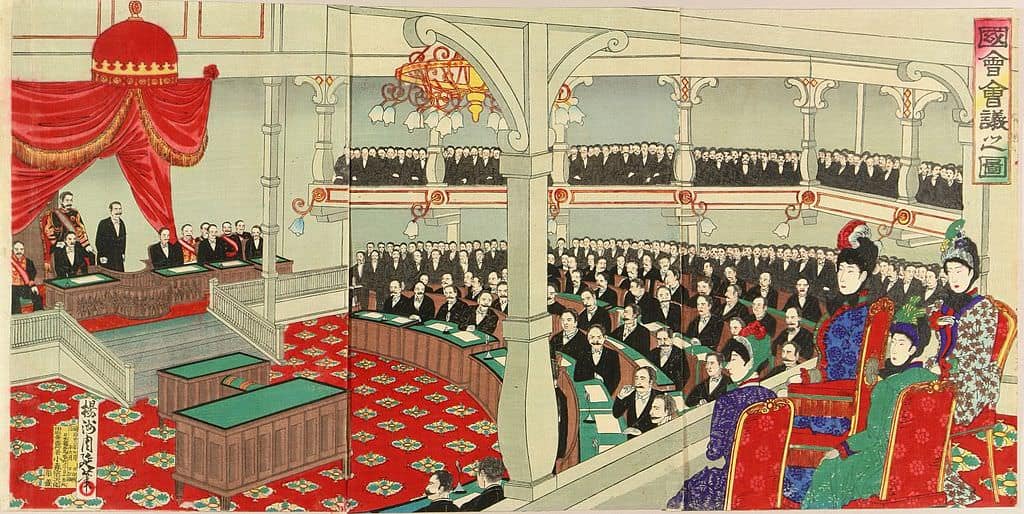 Unfortunately, the BMFA was inconsistent in its response to the protestors. First it said the experience would remain as is, then it cancelled the wearing of the kimono and limited it to touching only. The museum missed an opportunity to educate, something they have been doing very well with their new wing and the signage accompanying each exhibition in the museum overall. That being said, criticism, often highly negative criticism, can get people to attend an exhibition to see what all the fuss is about. That is a good result.

One posed question would be did any country at any time force Japanese to wear Western dress? The answer is no, it was the Japanese themselves who embraced many facets of Western dress after the opening of Japan to the West. School uniforms are but one example. The image of the woodblock print by Yoshu Chikanobu (1838 – 1912) titled “Scene of the Diet” shows members of the Diet and observers in Westernized dress.

At present in the United States, Hiromi Asai, a kimono designer, is trying to raise funds to hold a show during fashion week in February 2016 and present kimono as a form of modern dress that “is beyond cultural and ethnic boundaries.”

Will much ado about a kimono and the museum’s indecisive response help or hinder that cause? Have the protestors confused centuries and cultures and are responding to current events? It would seem very unfortunate that what should have been a learning experience would be flipped upside down and become instead a cause by some for unrelated dissatisfactions. I am certain that the BMFA wishes this had not occurred. It will be interesting to see what follows.

Bringing the question of cultural appropriation back to the magazine, here is the About Us description. We are three people, and you will see that Sakiko Yanagisawa, Master Calligrapher, is dressed in very sexy Western dress for a performance presentation, and Rona Conti, calligrapher in her studio, is wearing a samu-e or monk’s work clothing.