Simon Silaidis, Visionary, Urban Calligrapher, is no Ninja. He neither hides nor keeps his identity secret. In the world of graffiti related pursuits, though that would be simplifying matters greatly, his persona and work looms large.

Far from being an emerging artist, he is well established and has been interviewed and lauded many times in many lands. What you need to know about Silaidis is that he cannot be easily described with one or two catch phrases or put into an unchanging category of art as is often the case with critics and art historians who wish to box artists into conveniently slotted groups.

Let’s begin with game show answers or what one’s teacher in kindergarten might ask. What is your favorite color Simon? Simon says black because it is neutral and consistent, appearing in the same way.

The wise art teacher does not say oh, I see, that is a great flower. They ask the opened ended can you tell me about this. What is your work about Simon? Simon says letters.

What materials do you like to use? Brushes and bamboo pens in the studio among others, anything and everything that can act like a brush to make marks or words or letters.

Those are bare bones basics and give little flavor to the fullness that is Simon Silaidis. Some simple facts and a linear timeline for starters.

A checklist of sorts but in words. Loving to draw and encouraged completely by his parents, his teachers in school yelled at him for his drawing of what seemed to them to be aggressive letters. He muses but only for a brief moment about what they think should they see his work now. Always experimenting in art and consistent with this background, he later would skip school to write on walls illegally in the manner of the stealthy graffitists.

Chasing his dreams, experimenting, pushing himself has always been his way. If one recounts his paths, they may seem logically connected and seamless. Yet they are the complicated multiplicity of talent he exhibits.

Timeline factor: In 1998 he attended a Graffitti Festival in Athens and for the next two years pursued work in a variety of graffiti styles. Two years later life developed in a more formal way.

At the end of 2001 he began full out graphic design which afforded challenges along with travels far and wide. Interpreter of the environment and landscape and entrepreneur, his successes kept him enormously busy, earning accolades along the way.

It is hard to imagine that someone so young could have achieved in his relatively short lifetime so much. Were one to see his work and his many projects, one would think that he was in his second lifetime per Japanese tradition, “kanreki”, life begins again at 60. He is half that age. Speaking Greek, German, Japanese and English allow him fluid access to collaborate with many and he does.

Then there is Urban Calligraphy. His own words about what that means are illuminating but none more so than seeing the work itself. Responding to what is, finding the abandoned or unloved or simply unique, he creates pieces of calligraphy which cross cultures, drawing from Western, Asian and Arabic calligraphy. By the time you have finished reading this he will surely have added more to his repertoire and visual vocabulary.

Then there is filmmaking and his collaborations over which Simon sees with an exquisitely sensitive eye all attention to detail. His movements are captured by photographer and filmmaker Alexis Ioannou and accompanied by the music of Adele’s Skyfall, all coordinated for displaying his creating a rooftop piece of massive proportions.

Asked to describe or compare street work or studio work, gallery work versus environmental performance art which lasts as long as conditions permit, he thinks that street work has a certain greater authenticity. Yet, as is his way, ever changing or entering doors left, then right, then left again, in the place in which he lived for three years and says that he loves the most, there will be a Solo Exhibition of Urban Calligraphy in the Center of Tokyo.

From the 10th of August to the 20th at Kojimachi Gallery, viewers will be able to see his studio work including his most recent. He will not be touching down briefly though. He will be scouting out places for new murals in Tokyo and Hiroshima. 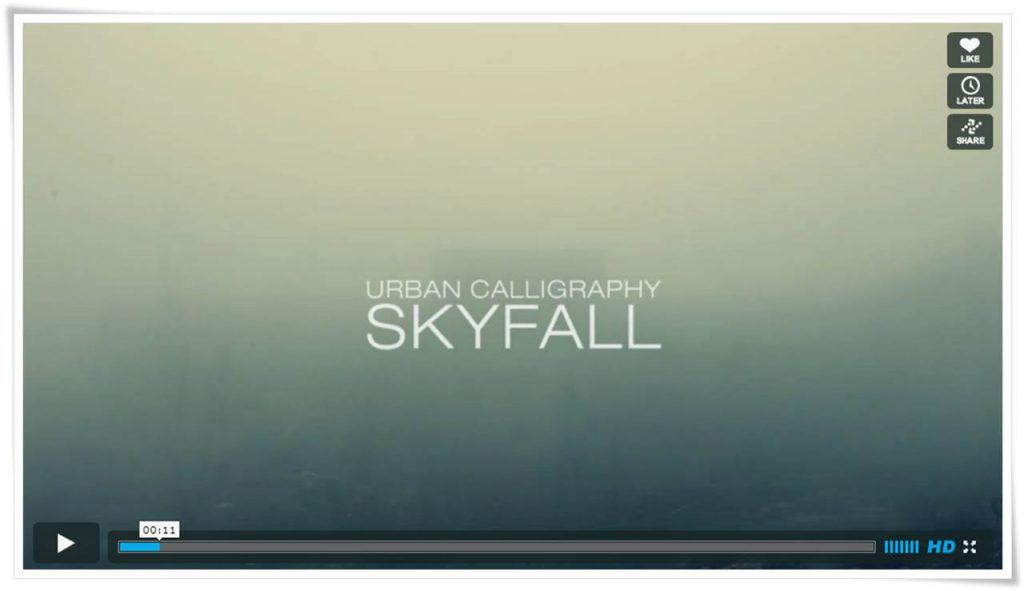 And, as is his whirlwind of talents and ideas, projects and developing the new, there will be a film upcoming in the Fall. Never satisfied or resting on any laurels, he always continues to challenge himself, create anew, see anew.

If asked what is his favorite work, he would not reply as did Robert Frost about his poetry, “The one last praised.” Simon’s “favorite” is the next, the next challenge, the next piece, the next design, the next film, the next mural for Urban Calligraphy, the next exhibition all intermingled. He is a one-man orchestra whose energy pervades all that he does, collaborating with others while keeping all of his batons in the air at once. This is Simon Silaidis.