Can an Armless Person become a Calligraphy Master

It's a pretty rare person who has mastered the classical art of calligraphy. Wu Yong is all the more exceptional because he writes by holding the brush between his teeth. 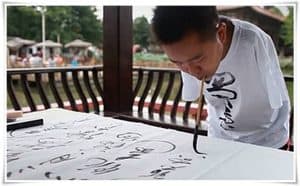 Figure 1. A Photo of Wu Yong, the Armless Calligraphy Master

To the disbelief of those around him, he was determined to keep up with classmates in both studies and physical activities. He re-learned how to play sports, he went off to university, and he learned how to do calligraphy by holding the brush in his mouth.

Wu uses his feet to dress himself, brush his teeth, surf the Internet, and do the things of ordinary life.

He also persevered in his studies, continuing to practice calligraphy even when his mouth was tired and sore and his teeth chipped. He said he practiced at least 300 days of the year for more than ten years.

He said his goal in doing calligraphy is not so much to make something beautiful as it is to connect to and understand classic traditions and people.

He went to university, attending the Chengdu University of Technology's applied arts department. After he graduated in 2004, Wu found work with a Beijing performing arts troupe. His daily “oral calligraphy” performance lasted 10 minutes, but he soon realized he didn't enjoy it, decrying the performance as “high-level begging.”

In 2009 he moved back to Sichuan and joined a group of Chengdu student volunteers and began to teach calligraphy to the disabled. In June of 2011, this became a paid occupation.

Wu said not only does he want to promote interest in calligraphy, he also wants to send a message to disabled people:

“We're disabled, but we're not handicapped. We can still strive to improve ourselves and make contributions to society.”

Article via “gochengdoo.com” and Thank you to Jane.

Beyond Calligraphy is an e-magazine founded in 2010. At its essence, it is exactly as the name implies, going beyond the traditional explorations of Asian, Middle Eastern and Western calligraphy. It is encyclopedic in scope and specific in exploring particular aspects of Asian (Chinese and Japanese), Middle Eastern and Western calligraphy. Please follow us on any of the links below