Logic Behind The Magic – Brush Techniques, Part III (b) 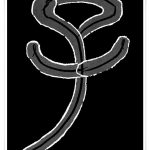 Figure 1. The small seal script (小篆, しょうてん, shōten) form of the character 子 (し, shi, i.e. “child”) with lines indicating the movement of the brush tip. Characteristic of small seal script, note the circular movement of the brush tip at the beginning of each stroke, indicating the application of the “hidden spear” method in conjunction with the “direct brush” technique.

Part III(a) introduced three groups of brush operation methods, that conclude a calligraphy stroke, namely: 起筆（きひつ, 、kihitsu, lit. “brush awakening”）, 送筆（そうひつ, sōhitsu, lit. “sending the brush {on the paper surface}”)）, and 収筆（しゅうひつ, 、shūhitsu, lit. “finishing, or, restoring the brush” {to its former position}）. In Parts III(b), (c) and (d), I will talk about each of those in detail.

In this article, let us focus on the 起筆, i.e. the moment the brush descends to the paper. Given that calligraphy history spans from 3500 to 7000 years, you can imagine that there are many techniques commonly applied in calligraphy that were developed during that time. Nevertheless, below I am listing the major brush application methods for the 起筆 group:

Before proceeding with more detailed explanations, it is important to remember that some of the above methods may be used in conjunction with each other. For instance, the “direct brush” technique is often applied simultaneously with “reverse brush” and “hidden spear”, etc. Scripts such as seal script (篆書, てんしょ, tensho) or clerical script (隷書, れいしょ, reisho) require that a calligrapher merges several techniques. In fact, any script and its variations that you undertake to write (or understand by looking), will ask you to combine multiple brush operating methods. Through emphasizing those, one’s personal writing style (書風, しょふう, shofū) is defined. 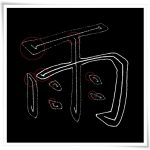 Figure 2. The character 雨 (あめ, ame, i.e. “rain) in standard script (楷書, かいしょ, kaisho). Characteristic of standard script, the operation of the brush tip requires forming each character with strict and precise brush strokes. Even the simplest dot is created by rather complex brush tip movements.

直筆（ちょくひつ, chokuhitsu, lit. “direct brush”）brush method (1) is based upon maintaining a 90 degree angle between the brush axis and the paper surface (Figure 1, also Figure 4). This method will virtually automatically imply application of the “hidden spear” (7) technique (Figure 1), which is, in essence, hiding the brush tip within the stroke thickness that is being written. Another feature of the “direct brush” method is that the pressure of the brush against the paper surface should be equal at all times. This method is very important for writing small seal script, where lines ought to be round and closed as well as of uniform thickness. Writing using this method should be very slow and well-paced, without kasure (掠れ, かすれ, “streaks of white”). The brush tip should always be in the middle of the stroke (see “hidden spear”, {7}).

側筆（そくひつ, sokuhitsu, lit. “sided brush”）method (2), as you probably guessed, is the opposite of the above “direct brush” brush method (1). The brush is applied at a slight angle to the paper surface, and, consequently, the brush tip is “revealed” (see “revealed spear” {6}) and marks the outer edge of the stroke. 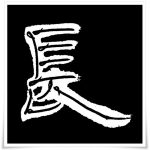 Both methods (1 and 2) have various names. The “direct brush” method is often called “active spear” (活鋒, かつほう, katsuhō), whereas the “sided brush” is referred to as “dead spear” (死鋒, しほう, shihō). It is believed that writing with the brush tip hidden retains the energy of the calligraphers mind and passion within the brush strokes. They are more powerful and profound. When the brush tip is revealed, although the strokes seem to be more vivid and to have more movement, the energy is somewhat lost, and the writing is more elegant (as in stylised) than spiritual.

The “collapsed brush” method (3) is similar to the “sided brush” technique, though the angle is much steeper, hence the name. This method is rarely used as its aesthetical value is rather low. 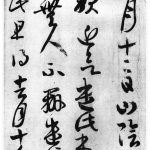 Figure 4. Fragment of one of the letters attributed to Wang Xizhi (王羲之, 303–361) of the Jin dynasty (晉朝, 265 – 420 C.E.). A perfect example of “direct brush” applied in cursive hand. If you look closely at the brush strokes you will realize that the brush tip was led through the middle of each line. This particular handwriting is very powerful. Lines are thick yet at the same time agile and full of retained energy.

The “obedient brush” method (4) is based upon inclining the brush handle (筆管, ひっかん, hikkan, lit. “brush tube”) towards the direction in which one’s writes. In other words, the brush obeys the direction of the line. I would say this is quite usual in clerical script (隷書, れいしょ, reisho), especially during the writing of the silk worm head and the goose tail. It would be also suitable for emotional writing in cursive (草書, そうしょ, sōsho) or semi-cursive (行書, ぎょうしょ, gyōsho) scripts, and Japanese kana (かな). This method should not be confused with the “sided brush” (2) or “revealed spear” (6), as both of them require maintaining a more or less constant angle between the brush and the paper.

The “reverse brush” method (5) is based upon moving the brush tip on the paper in the opposite direction than the intended stroke (Figure 3). Let us say that you want to write a horizontal stroke where A and B are its ends, C is the middle part, and D is between A and C. The brush descends on point D, then moves to A, through D, C and to B. This method is essential for clerical script and small seal script, but it does not mean that it cannot be applied in other scripts. The only script that should not be written with this method is oracle bone script where brush strokes are meant to imitate incisions and therefore should purposely remain sharp. 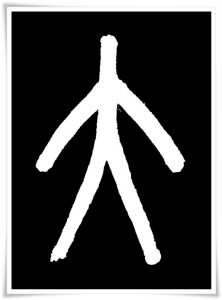 Figure 5. The character 大 (だい, dai, i.e. “big”) in small seal script (小篆, しょうてん, shōten) from a calligraphy masterpiece by the seal script scholar and calligrapher, Wu Dacheng (呉大澂, pinyin: Wú Dàchéng, 1835 – 1902 C.E.), Qing dynasty (清朝, pinyin: Qīng cháo, 1644 – 1912 C.E.). Note the round beginning (top) and the ends (remaining four) of the strokes (the one to the bottom-left is not round, due to the fact that the original text was damaged or smudged). You do not see other stroke beginning points, as they start on the existing brush strokes. Round beginnings and ends are very characteristic for small seal script.

The last two methods (6 and 7) were already mentioned above. Nonetheless, it is not true that the “direct brush” method unconditionally pairs with the “hidden spear” method (Figure 5). It is possible to reveal the brush tip even when writing at a 90 degree angle. The “hidden spear “method is also very characteristic of the “reverse brush” technique (5), where the tip of the brush is wrapped, so to speak, within the brush stroke. In sum, the “revealed spear” could be compared to the manifestation of one’s ego, whereas the “hidden spear” emanates from the inner strength of the calligrapher.