七 belongs to the 仮借文字 (かしゃもじ, kashamoji, i.e. rebus (phonetic loan) characters; or in other words, characters that were borrowed phonetically to write another homophonic word.

Even though the book 說文解字 (shūowén jiězì, i.e. “Explaining Simple {Characters} and Analyzing Compound Characters”), by the philologist Xu Shen (許慎, pinyin: Xǔ Shèn, ca. 58 C.E. – ca. 147 C.E.), explains the symbolic meaning of the character 七, describing it as one of the sacred numbers (聖数, pinyin: shèngshù), which are further split into two groups (odd numbers corresponding with the Yang {陽, Chinese: yáng} element, and even numbers corresponding with the Yin {陰, pinyin: yīn} element), already the earliest forms (Figure 1) of the character 七 clearly indicate that it is a pictograph of a severed bone. This theory is further supported by the pictograph of a blade, i.e. horizontal, slightly inclined line that cuts through it.

Formerly, the shape of the character 七 was identical with the one of the character 十 (pinyin: shí, i.e. “ten”), imitating a long bone (vertical line), and the above mentioned blade. In later stages, and more precisely the Warring States Period (戰國時代, pinyin: Zhànguó shí dài, 475 – 221 B.C.), the early clerical script (隷書, れいしょ, reisho) form of the character 七, which can be found on bamboo (wood) slips (木簡, もっかん, mokkan), had its lower part of the vertical line stylised, and curved to the right, just the way you see it on the printed font version of this character (although without the hook at the end); see Figure 3.

>Prior to clerical script forms, some forms of the seal script had the vertical line curved, which possibly was to emphasise the bone fracture or dismemberment (Figure 2).

The sound of the character 七, which in English would be close to a short and flat “chi”, comes from the sound of cutting the bones with a saw (which is said to be in connection with Shang {商朝, 1600 – 1046 B.C.} and Zhou {周朝, 1046 – 256 B.C.} dynasties rituals). When I looked into a (Japanese) Chinese character dictionary, which contains over 9000 characters, I noticed that there is only one character there under the on-yomi (音読み, おんよみ, lit. “sound reading”, i.e. Chinese reading of characters) of しち (shichi, which comes from the Chinese reading of the character 七 – qī). It would appear that this sound is very likely exclusively used for this particular character. The transition (i.e. using 七 as a rebus character) must have taken place relatively early in the history, as already the divinatory texts of the Shang dynasty, written in oracle bone script (甲骨文, こうこつぶん, kōkotsubun), show the character 七 used in association with number 7. 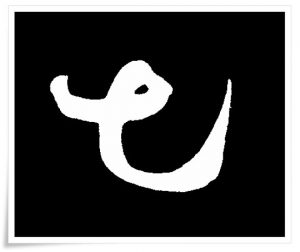 As it happens with any of the “sacred numbers”, character 七 is often seen in names (more so in the titles of books). In Wen Xuan (文選, pinyin: Wénxuǎn, lit. “selected literature”), one of the earliest collections of Chinese poetry, compiled in 520 C.E. by a crown prince of the Liang dynasty (梁朝; pinyin: Liáng cháo, 502-557 C.E.), Xiao Tong (蕭統, pinyin: Xiāo Tǒng, 501–531 C.E.), we can find titles such as 七発, 七命, 七啓, etc. It is believed that character 七 played a role of the enumerative indicator in connection with incantatory chanting of certain type of poems.

Figure 5. Ink rubbing of the standard script (楷書, かいしょ, kaisho) of the character七, taken from the early Tang dynasty