In the ninth year of the Yonghe era (永和九年, pinyin: Yǒnghé, 345 – 357 C.E.), the year of the Yin Water Ox, under the reign of Emperor Mu of Jin (晉穆帝, pinyin Jìn Mùdì, 343 – 361C.E.), at the beginning of the third lunar month (after April 20, 353 C.E.), on the first day of the month of the serpent, fourty two literati noblemen gathered at the Orchid Pavilion in Shanyin County (山陰，pinyin: Shānyīn), in order to celebrate the Spring Purification Festival (修禊, pinyin: xiūxì). One of them was Wang Xizhi (王羲之, pinyin: Wáng Xīzhī, 303–361), who, gently intoxicated after the jolly outing, sat down on the banks of a humming creek in the shadow of lofty peaks (Shanyin [山陰] literally means “mountain shadow”). Wrapped in a blanket of fresh warm air, he wrote his 324 character long opus magnum – “Preface to the Poems Composed at The Orchid Pavilion” (蘭亭集序, pinyin: Lántíngjí Xù).

Figure 1. The entire text of a copy of the “Preface to The Poems Composed at the Orchid Pavilion” (蘭亭集序, pinyin: Lántíngjí Xù). There are over 50 copies that have survived, written by various ancient Masters, although three are considered to be the most outstanding. You can compare the first few characters of the copies in Figure 1 with the two others shown in Figure 5. The pictured version was copied from the original by a Tang dynasty (唐朝, pinyin: Táng cháo, 618 – 907 C.E.) calligrapher, Feng Chengsu (馮承素, pinyin: Féng Chéngsù, birth and death dates are uncertain, though we know that he wrote this copy in the year 639 C.E.), commissioned or rather ordered to do so by Emperor Taizong of Tang (唐太宗, pinyin: Táng Tàizōng, 599 – 649). This version is known as Shen long ban yin ben (神龍半印本, pinyin: Shénlóng bànyìn běn)

Purification rituals usually involve physically exhausting activities such as not sleeping for extended periods of time, breath control exercises, submerging one’s body in cold water, standing under waterfalls, etc. Representing various cultural and political circles, the group of celebrities gathered along the bank of the meandering stream bettered all those concepts, purifying their hearts with wine, poetry and calligraphy writing.

Figure 2. This fragment’s first part reads: 是日也，天朗氣清，惠風和暢，仰觀宇宙之大。(pinyin: Shì rì yě, tiānlǎng-qìqīng huìfēng héchàng, yǎngguān yǔzhòu zhī dà, i.e. “Today’s sky is bright and the air is crystal clear, and a gentle breeze is blowing. Looking up, one can embrace the vastness of Heavens”).

They sat on the grass near the water and floated a cup made of lotus leaf filled with wine. The person the cup stopped in front of was to compose a poem, and if he failed, he had to drink a cup of wine as a penalty. It is not difficult to imagine that the longer the feast lasted, the better the poems became. As Wang Xizhi wrote in his Preface, the weather on that day was gorgeous, with mild wind and sunny skies.

We read in the Preface: 是日也，天朗氣清，惠風和暢，仰觀宇宙之大。(pinyin: Shì rì yě, tiānlǎng-qìqīng huìfēnghéchàng, yǎngguān yǔzhòu zhī dà, i.e. “Today’s sky is bright and the air is crystal clear, and a gentle breeze is blowing. Looking up, one can embrace the vastness of Heavens”); see Figure 2.

After all of the partying and drinking in the evening, all of the poems were gathered, and Wang wrote the famous Preface to The Poems. It is said that he tried to write the same text over 100 times on various occasions later, yet was unable to repeat it with equal elegance and refinement. This illustrates the importance of the calligrapher’s mood during writing, the Four Treasures of The Study” (文房四宝, ぶんぼう しほう, bunbō shihō) he selects to use, and the weather which surrounds him. The atmosphere of the party, the sunny weather, the wine and great company could not be subsequently recreated.

The above confirms the calligraphy theory presented in the preface (the only part of the book that survived) to the book entitled Shu Pu (書譜, pinyin: Shū Pǔ, i.e. “Treaties on Calligraphy”) by the renowned calligrapher and theoretician of the early Tang dynasty (唐朝, pinyin: Táng cháo, 618 – 907 C.E.), Sun Guoting (孫過庭, pinyin: Sūn Gòutíng: 646–691 C.E.), also known as Sun Qianli (孫虔禮, pinyin: Sūn Qiánlǐ). He describes five discords and five harmonies that define the conditions for creating an outstanding calligraphy work. Please read more about them here

Calligraphy is a child of the moment, and every single moment is different. For this reason, each work is unique. If you own a calligraphy work, you can be certain that it is the only one in the entire world. 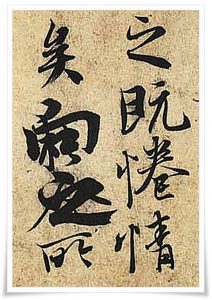 Figure 3. The Preface was written under the influence of strong emotions. Numerous corrections add a unique flavor to this masterpiece.

For writing The Preface, Wang Xizhi used a brush made of mouse whiskers (鼠鬚筆, そしゅふで, soshu fude). Mouse whiskers’ hair is extremely responsive and unbelievably flexible, and at the same time, very thin yet capable of creating surgically precise and sharply defined lines. This is one of the reasons that the characters of the Preface seem to be so alive. The paper used was silk thread based (蚕繭紙, さんけんし, sanken shi, i.e. “paper made from a pure silk worm thread”). It had a smooth, slippery surface, and the brush glided on it like a white crane on autumn skies.

Further, since the text was written extemporaneously, and the author was under the influence of wine and overflowing with euphoric feelings, the character sizes and the style in which they are written are inconsistent. Despite that, the composition can be viewed and read as one harmonious entity. There are a few mistakes and corrections made within the text. Xizhi simply wrote over the incorrect characters with a more forceful line. Thus, paired with his outstanding writing technique, the already delightful flavor is greatly enhanced, making the whole composition even more beautiful (Figures 3 and 4). 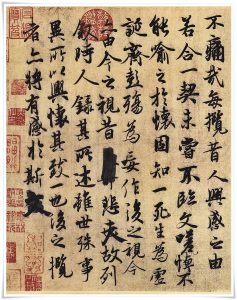 Figure 4. The last 1/3rd of the text is rife with strong emotions. Xizhi is debating here the meaning of life and reveals his personal views and philosophy.

If you compare the first half of the Preface with its second half (divided by the seals in the middle), you will notice that the style becomes more emotional and personal (Figure 4). There are more corrections, and the writing appears to become more spiritual, with rows of text becoming tighter, as if Xizhi’s mind were rushing ahead of the brush, and he was trying to catch up with his flowing emotions. In the text, he ponders the meaning of life and death and expresses his thoughts regarding the fragile nature of the relatively short span of one’s human existence. In his existential monologue, he remarks that we should enjoy life and appreciate moments of pleasure, for when the years add up, a person becomes aware that his life will come to an end, and he may regret that he missed out on simple pleasures.

“Preface to the Poems Composed at The Orchid Pavilion” is a carpe diem appeal to future generations. In the last lines he writes: 後之攬者，亦將有感於斯文 (pinyin: Hòu zhī lǎn zhě, yì jiāng yǒu gǎn yú sīwén, meaning: “I hope for later generations who will have a chance to read my words to be as moved by them as I am now”). 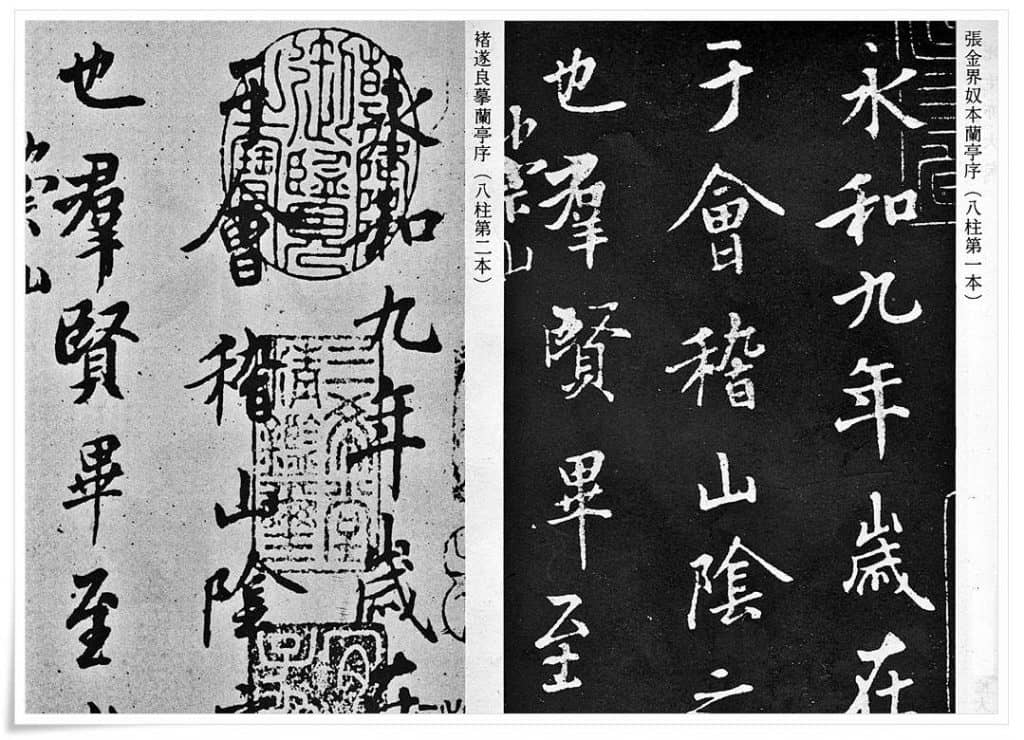 There are many outstanding calligraphy works extant, and some are cherished more than others. However, the great majority of calligraphy treasures are very emotional writings; An interior dialogue with the self, a message to a third party written in a state of mind outside of the usual boundaries, the Preface confirms that emotions and feelings are what make us human and what moves us to tears. Xizhi’s Preface is not only a sea of passion but also a marvelous display of his outstanding skill as a calligrapher, writer, and a sensitive human being.

Once again, true calligraphy is written by the soul, not with a brush. It is born of our subconscious state, free of any pre-determined form and written while rules are quietly sleeping.