山 belongs to the 象形文字 (しょうけいもじ, shōkeimoji, i.e. set of characters of pictographic origin). It is a pictograph of a mountain rising up from the surface of the ground.

In the “Commentaries to Explaining Simple (Characters) and Analyzing Compound Characters” (説文解字注, pinyin: shūo wén jiě zì zhù) by a Qing dynasty (清朝, pinyin: Qīng cháo, 1644 – 1912 C.E.) scholar, Duan Yucai (段玉裁, Duàn Yùcái, 1735 – 1815), we read that both 山 and 宣 (pinyin: xuān, i.e. “to proclaim”, “to announce (publicly)”) have rhyming sounds (due to their meaning related to Gods, and their proclamations [announced via natural phenomena, such as clouds and rains, etc.]), also known as stacking rhymes (畳韻, じょういん, jōin), often used in poetry based on Chinese characters. This theory is further confirmed in “Shi ming” (釈名, pinyin: Shì míng), a late Han dynasty book devoted to linguistics, in which we read that 山 has the same meaning (and also rhymes with) as 產 (pinyin: chǎn, i.e. “to reproduce”, “to give birth”).

In ancient China it was believed that mountains gave birth to the clouds, and from them originated the movement of the sky. As a result of such beliefs, mountains were often the central subject of prayers for rain. The meaning of “proclamation” is most likely an allegory for words of the gods in the form of rain in response to the prayers of people. Thus, each time we admire a mountain range during a rainstorm, we are listening to the words of Heavens. 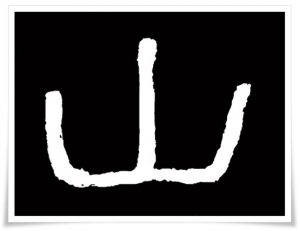 Please also refer to the article on the etymology of the character 火 (ひ, hi, i.e. “fire”), and note the striking similarity of its ancient forms of the oracle bone script (甲骨文, こうこつぶん, kōkotsubun) to the one of the character 山. Both characters are pictographs, though their etymology differs.

Figure 4. Although I break here the historical chronology of script appearance, it is for a purpose of aligning four variants of the character 山, written by one calligrapher.

Figure 4. Although I break here the historical chronology of script appearance, it is for a purpose of aligning four variants of the character 山, written by one calligrapher. The very top is a semi-cursive script (行書, ぎょうしょ, gyōsho) form of the character 山. The remaining three are in cursive script (草書, そうしょ, sōsho). Note the change of stroke order in cursive script forms. Ink rubbings from works of Wang Duo (王鐸, pinyin: Wáng Duó, 1592 – 1652 C.E.), who lived on the verge of late Ming (明朝, pinyin: Míng cháo, 1368 – 1644 C.E.) and early Qing (清朝, pinyin: Qīng cháo, 1644 – 1912 C.E.) dynasties.

Figure 5. Ink rubbing of the standard script (楷書, かいしょ, kaisho) of the character 山, from a work titled Xiari you shicong shi (夏日游石淙詩, pinyin: Xiàrì yóu shícóng shī) by a poet and calligrapher Xue Yao (薛曜, pinyin: Xuē Yào, birth and death dates are unknown, though it is confirmed that Xue Yao was active during the end of 7th and beginning of 8th century C.E.), early Tang dynasty (唐朝, 618 – 907).