right (the opposite of “left”). 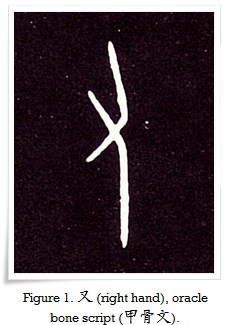 This theory is supported by the etymology of the character 左 (ひだり, left), where the top left part of the character is a pictograph of the left hand (I will explain this in details when talking about this kanji in my later posts), and 工, which is a pictograph of the rod or staff, used for the ritual. Further association with the meaning “right” and “left” is that the vessel and the rod used for the above mentioned ritual were swung by a shaman or a priest to the left and right, and up and down, in search of the divine, and receiving a blessing (benediction).

The above would explain why the stroke order of the “hand” radical in both 右 and 左 is different (右 begins from the horizontal stroke, whereas 左 from the slanting stroke, written from the top right to the bottom left). In seal script （篆書, tensho) we usually write the long line depicting the arm and middle finger, and then add two more short lines (the remaining two fingers).

Another theory suggests that the character 右 consists of a pictograph of the right hand (又, mentioned above) and the mouth (today known as stand-alone kanji 口, くち), depicting a hand held just near the mouth for assistance, while eating (Figure 2). This theory would explain why the kanji 右 is displayed in dictionaries under a group of kanji which share the same radical: 口 (mouth). Further, the pictograph of the ritual vessel and the one of human mouth were virtually identical in the Oracle bone script (甲骨文, kōkotsubun), (Figure 3).

Simply, various characters were added as the language evolved, whenever there was a need for distinguishing new words that would allow for more precise communication through writing. Adding the pictograph of a mouth or a ritual vessel to the Oracle bone script form of 又 (Figure 1) led to creating a new, more complex character: 右 (Figure 2). The validity of various etymology theories of the character 右 is further supported by the different shapes of 口 (compare Figure 2 with Figure 3 and Figure 4). 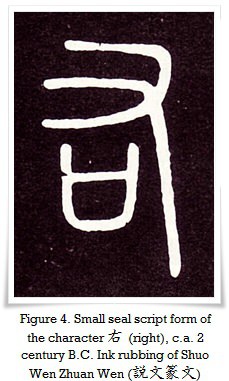 The meaning of “assistance” and the “right hand” over a “mouth” leads to a meaning: “someone’s right hand” (i.e. aid, assistant), usually of a ruler. It is not without reason that the meaning of the kanji 佑 (ゆう, yū) is “to assist” or “to aid”. Its construction is based on combination of the person radical, a simplified form of 人 (ひと, hito), and 右. It could possibly indicate a person standing near the ruler, and whispering into his ear, while covering his mouth with right hand.

Both theories have similar history and could go as far as the origin of Oracle bone script, i.e. the Shang dynasty (商朝, 1600 B.C. – 1046 B.C.). Scientists, however, are not able to prove beyond any doubt which of the above theories is the original etymology of the character 右, especially that the earliest forms of this character coexsisted simultaneously. Lastly, the Oracle bone script (甲骨文, kōkotsubun) and kinbun (金文, i.e. “text on metal”) forms of the vessel used for the rituals, and mouth, had similar to identical shape (Figure 3). 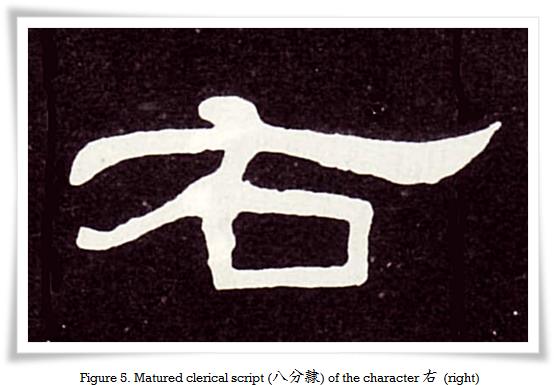 There are many characters that may have multiple shapes and forms. When thinking of the etymology of the Chinese characters, one needs to take into consideration the huge area that the Chinese writing system was developed in, the distances between human dwellings, and time required to communicate any information. Last but not least, many wars and conflicts between clans 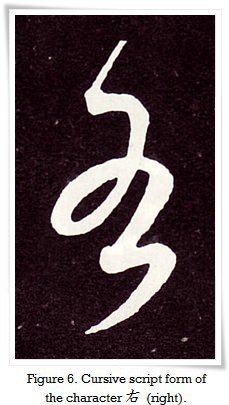 often led to developing unique characters used only on given territory. It is not uncommon that some characters may have up to several forms and shapes. For instance, the kanji for a tiger (虎, とら, tora) has (at least) four forms, 邦 (くに, kuni, i.e. “country”, “(the) state”, “region”, etc.) has as many as eight of them. Those forms are further multiplied by various scripts (please jump to our main page, where I discuss five core calligraphy styles, in details). Kanji having two or three forms are not unusual. Consequently, one character may have few forms yet common etymology, or one form based on various etymology theories (just like kanji 右). 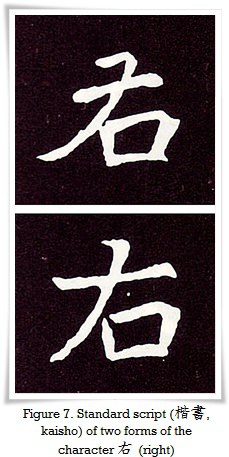 Figure 7. Standard script (楷書, kaisho) of two forms of the character 右 (right) based on ink rubbings from two different stelae of the Northern Wei dynasty （東魏, 534 – 550). Note the remnant of the “3rd finger” (top character) emphasising the origin of the top left part of the character and its connection with the character 又 (right hand). 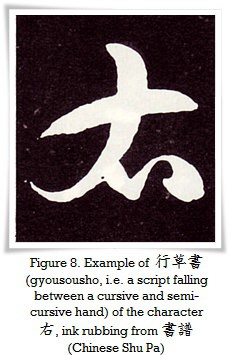