It is extremely difficult to place the origin of cursive script (草書, sousho) on a timeline. I reckon no one would disagree with the idea that cursive writing came to life the very moment someone decided to put their thoughts down in a hasty or careless manner.

It is, however, undisputable that a prototype of cursive script, that can be directly linked to its modern form, originated during the Han dynasty (漢朝, 206 B.C. – 220 C.E.) via the natural evolution of the mature form of reisho (隷書, clerical script), known as happun rei (八分隷, lit. “eight parts clerical”).

The whole process was sparked by the idea of simplification of strokes, or just by writing faster due to the growing need of more rapid communication.

The embryo of sousho is known in the calligraphy world as shousou (章草) which literally means “a draft (governed by) rules”. It still bore visible elements of reisho, yet was much smoother and curvier. Eventually, shousou developed into what we know today as cursive script. 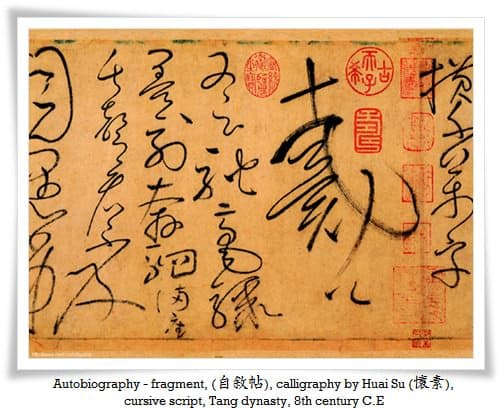 The most renowned master of sousho during the Han dynasty (and possibly of all times) was Zhang Zhi (張芝, birth date unknown, died in 190 C.E.). He was a pioneer of modern cursive script (今草, konsou). Zhang was so poor that he could not afford paper. He therefore studied on any cloth he had available. After writing he used to wash his brush, inkstone and the cloth he used in the pond near his house. The legend says that over the years its water turned pitch black. Even today in China, the phrase “facing a pond” (臨池, Chinese: lin chi) means to study calligraphy. The calligraphy sage, Wang Xizhi (王羲之, 303–361) of the Jin dynasty (晉朝, 265 – 420 C.E.), used to say that Zhang’s works in sousho were unmatched, even by himself. Zhang Zhi is often quite correctly called tsao sheng (草聖) – which in Chinese means “cursive script sage”.

A few hundred years later, during the Golden Age of Chinese culture (Tang dynasty; 唐朝, 618 – 907), the calligrapher named Zhang Xu (張旭, unfortunately, the exact dates of his birth and death are unknown) created a style of cursive hand known in Chinese as kuang cao (狂草, “mad draft”). His sho is so incredibly powerful it can be intimidating. When I focus on his work I do not see black lines of characters, rather I see dragons freely gliding on crests of foamy clouds that roam open skies, tigers sneaking graciously on their deadly paws while stalking their pray, relentless, frenzied ocean waves smashing the coast during a fantastic storm or a graceful female dancer during a hypnotizing, dynamic performance.

Zhang, together with the monk Huai Su (懷素737–799) were known as “Mad Zhang and Crazy Monk” (張顛狂僧, zhang dian kuang seng). Both of them enjoyed wine and often wrote while thoroughly intoxicated. Su’s calligraphy in cursive script was lighter in its form than Zhang Xu’s, although equally insanely brilliant. 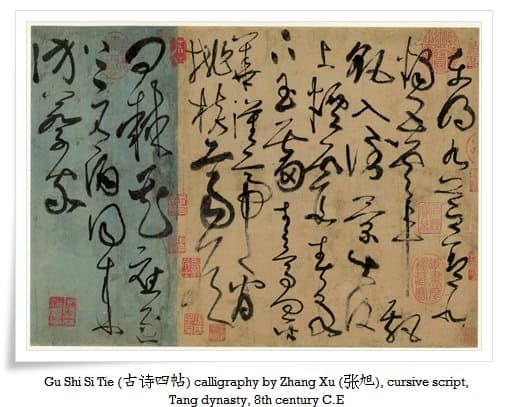 Knowledge of cursive script is necessary for anyone who wishes to be able to read hand written Chinese characters. Funnily enough, even some native Chinese or Japanese people, especially in the young generation, fluent in kaisho (楷書, standard script) or even gyousho (行書, semi-cursive script) may not be able to decipher the “draft script” (cursive hand).

For the layman cursive script may resemble a maze of random lines drawn by an excited hyperactive kid. It also may look like it is rather easy to write. The truth is that the knowledge required to be able to skillfully operate the brush’s tip in order to create harmonious and at the same time powerful and artistic sousho, one needs to not only devote himself to years of diligent studies but also to master kaisho, reisho (隷書, clerical script) and gyousho beforehand. Only then will the energy flow within the lines be sensible. 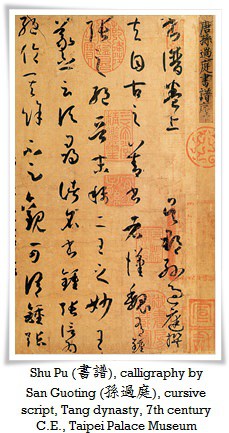 Good sousho is written with changes in rhythm but without pauses, unless one is introduced intuitively as an accent. The calligrapher unifies with the rhythms of his mind and loses himself in his soul. Moreover, the mind needs to precede what the brush creates. Any hesitation is obvious, making the sakuhin (作品, final work) look unnatural and forced. For this reason, calligraphy should be created from start to end, without distractions.

Sousho may appear random and completely abstract; however there are rules to it. Basically, the left-hand radical of the given kanji is simplified and the calligrapher emphasizes its right-hand side. Due to the complexity of kanji, there are guides for simplifying radicals and compounds. Even a tiny error may mislead the reader, suggesting a different kanji, and therefore a different meaning. Then again, since calligraphy is an art, some features are magnified and other simplified, which makes reading sousho extremely challenging. Writing it takes intense concentration and focus. Reading it requires a vast knowledge of sho.

Today, cursive script is understood to be any style where the strokes are executed swiftly (or they appear that way) and they tend to “round off” and “simplify” the structure of the given character. 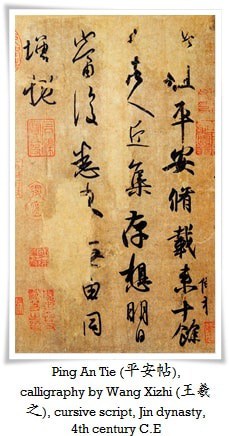 The prevailing rules of sousho consist of: not lifting the tip of the brush too often to maintain contact with the paper while writing a character (or even a whole verse), and simplifying characters by merging or omitting certain strokes. Merging characters is called renmentai (連綿体, lit. “unbroken line”), yet it does not necessarily suggest that the line has to be physically connected. The connection can be “suggestive” where we can almost see the line on the paper, but in fact it does not exist. The calligrapher writes in a way that when he lifts the brush, he is writing a line in the air and when the tuft lands on the sheet once more the space between the kanji creates an illusion of an unbroken line. This is similar to dance, where the gestures and rhythm are an extension of the form. Naturally, renmentai can be literally one long ribbon of ink, merging up to dozens of characters. Renmentai is essential to the Japanese calligraphy style called kana (かな).

In western terms, sousho is comparable to a jam session of absolutely brilliant musicians. It has everything the soul needs: the tempo, the passion, the melody and rhythm, both strong and soft accents, surprise, and most importantly; the ingenuity and charm of natural improvisation.